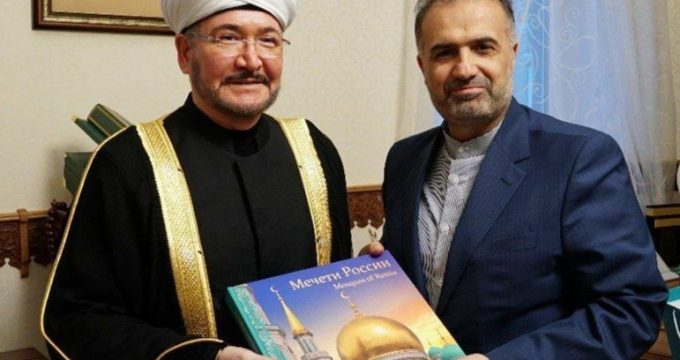 IRNA – The head of the Russian Council of Muftis appreciated Supreme Leader of the Islamic Revolution Ayatollah Seyyed Ali Khamenei for his support to retain the Palestinians’ legitimate rights.

In a meeting with the Iranian Ambassador in Moscow Kazem Jalali, Ravil Gainutdin said that they have always enjoyed friendly relations with Iran.

Gainutdin said that he, along with the members of the World Forum for Proximity of Islamic Schools of Thought, has visited the Supreme Leader in Tehran, adding that Russian Muslim journalists and religious scholars visit Tehran, Mashad, and Qom in a regular basis to take part in the international conferences.

He said that the fruitful relations between Russia and Iran in politics, economy, and culture should increase, adding that the Russian Muslims support such ties, which have already shown effective in solving the Syrian Crisis.

Gainutdin said that the Americans and Europeans are worried about the union between Tehran and Moscow and that the US sanctions on Iran, Russia, China, and Turkey are because they see the union of these countries as threat to its world hegemony.

The religious leader of Russian Muslims also said that the Deal of the Century proposed by the US and the Zionist regime was before long opposed by the peaceful countries because the solution must be talks not one-sided decisions imposed.

He also said that the Russian president and prime minister oppose the deal and believe it is not to the interest of the Palestinians people.

All the world sees that Russian and Iran are defending the rights of the Palestinians together, he said.

In the meeting, the Iranian ambassador, Jalali, hailed the intellectual ideology of Islam presented by Russian Council of Muftis’, and added that the extremist Islam, as shown by some, resulted in destruction of Islamic countries, killing of Muslims, and crimes in Iraq, Syria and other corners of the world.

Jalali also said that the officials of Russia and Iran have strong wills to expand ties in all dimensions.

He also thanked the Russian Council of Muftis, especially Gainutdin, for their efforts toward dialog among Abrahimic religions and Islamic sects.

Jalali said that Iran is to continue cooperation and interaction with religious councils of Russia in proximity of religions and Islamic sects.