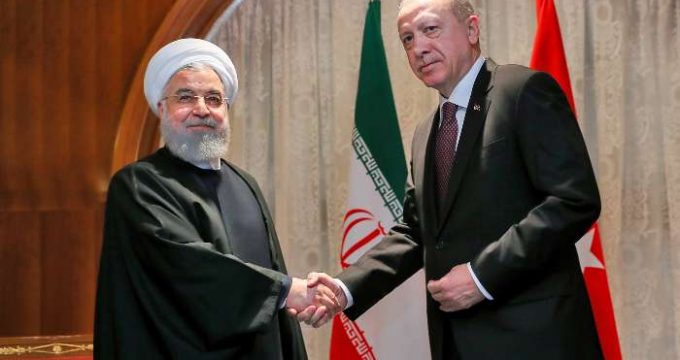 Press TV – Iranian President Hassan Rouhani says people should be protected and terrorists should be eliminated in Syria’s northwestern province of Idlib as tensions between Turkey and Syria have soared to a dramatic level after dozens of Turkish troops were killed in air raids in the region.

“The situation in Idlib is very complicated, considering the presence of dangerous terrorists and [the necessity] to protect innocent people living in this region,” Rouhani said in a phone call with his Turkish counterpart Recep Tayyip Erdogan on Saturday.

He stressed the importance of cooperation among Iran, Turkey and Russia in line with the Astana peace process to solve the conflict in Syria and said, “Trilateral cooperation at different levels has special significance and as it has been already announced, Iran is ready to host the next round of this trilateral summit.”

The previous trilateral meeting, the fifth in a row, between the presidents of the countries acting as guarantors of the Astana process to promote a peaceful settlement in Syria took place in Ankara in September 2019.

The trio also maintains contacts as part of the high-level meetings on Syria in Nur-Sultan (previously Astana), Kazakhstan. The last such meeting was held on December 10-11, 2019.

Elsewhere in his talks, the Iranian president lauded the Astana peace process on Syria as a great achievement for regional security, saying, “Definitely, increasing tension will not be in favor of anyone in the region and we should solve issues through dialog.”

He added that Tehran, Ankara and Moscow have agreed on the importance of safeguarding Syria’s territorial integrity, uprooting terrorists, protecting innocent civilians’ lives and settling the conflict in Idlib as soon as possible.

Tensions surged in Idlib, the last major terrorist stronghold in the war-torn country, on Thursday after dozens of Turkish soldiers were killed in an airstrike by Syrian forces.

The Russian Defense Ministry said in a statement that the targeted Turkish troops were among terrorists.

The Iranian Foreign Ministry on Friday called for an urgent containment of the chaotic situation in Idlib, saying, “The Islamic Republic of Iran is closely monitoring and pursuing the field developments and the regional consequences in Idlib.”

“Given the previous decision made by senior officials attending the Astana [peace] process on holding this meeting in our country, the Islamic Republic of Iran continues its efforts to hold the summit under the current critical circumstances,” the ministry said in a statement.

All countries must stand together to contain coronavirus: Rouhani

Rouhani also pointed to the outbreak of the coronavirus (COVID-19) in many countries across the world and said, “The coronavirus has turned into an international problem and all countries should stand together to overcome the crisis.”

He added that Iran has drawn up “effective and safe” plans and carried out very good measures to manage and control the virus and treat the patients.

The Iranian president also expressed the country’s readiness to immediately implement a health protocol between the two countries to fight the coronavirus in an effort to prepare the ground for the continuation of bilateral trade exchanges.

According to the latest statement released by Iran’s Health Ministry on Saturday, coronavirus infections have taken the lives of 43 Iranians, with a total number of 593 people being diagnosed with the disease across the country.

The Turkish president, for his part, said Iran plays a leading role in solving the Syrian crisis and added that political dialog is the only solution to the conflict in the country.

Erdogan added that Iran, Turkey and Russia have achieved positive outcomes during the Astana summit and emphasized the importance of continuing such a process to establish sustainable peace.

He also expressed his sympathy with the Iranian nation and the bereaved families of the victims of the coronavirus and said his country would spare no effort to help Iran contain the disease.