Newsweek | Tom O’Connor: Iran is racing to curb the rapid, deadly spread of the new coronavirus, but these efforts are complicated by tight economic restrictions imposed by the United States and frustrations among an increasingly embattled population.

Iranian Deputy Health Minister Iraj Harirchi revealed Monday that the government has confirmed 61 cases of the coronavirus, officially known as COVID-19, and that a dozen Iranians have died, the largest figure outside of its country of origin, China. As speculation about the true scope of the outbreak grew, Ahmad Amirabadi Farahani, a lawmaker from the worst-hit Iranian holy city of Qom, claimed that up to 50 had died. But Harirchi disputed this and said that if even a quarter of this sum turned out to be true he would resign.

Iranian Health Ministry official Minou Mohrez suggested this past Friday that the coronavirus potentially “exists in all cities in Iran,” according to the official Islamic Republic News Agency.

Concerns that Iran is ill-equipped to handle the burgeoning health crisis have been compounded by Iran’s trade isolation that has resulted from sanctions imposed by President Donald Trump’s administration. These measures have already helped to sabotage Iran’s economic growth and foster social unrest across the country.

Naveed Mansoori, a co-editor of online Middle East magazine Jadaliyya’s Iran Page, told Newsweek that it’s difficult to predict how Iranians will react if their government further fails to protect them from the coronavirus but suggested new displays of frustration directed at both leaders at home and the U.S. were likely.

“The U.S.’ sanctions regime has severely impacted the access that Iranians have to life-saving medical supplies and will most likely hamper the Islamic Republic’s ability to respond to the coronavirus efficiently,” Mansoori said. “In light of discontent with the sanctions, we will likely witness a field of criticism that resembles what we have heard in the past few months.” 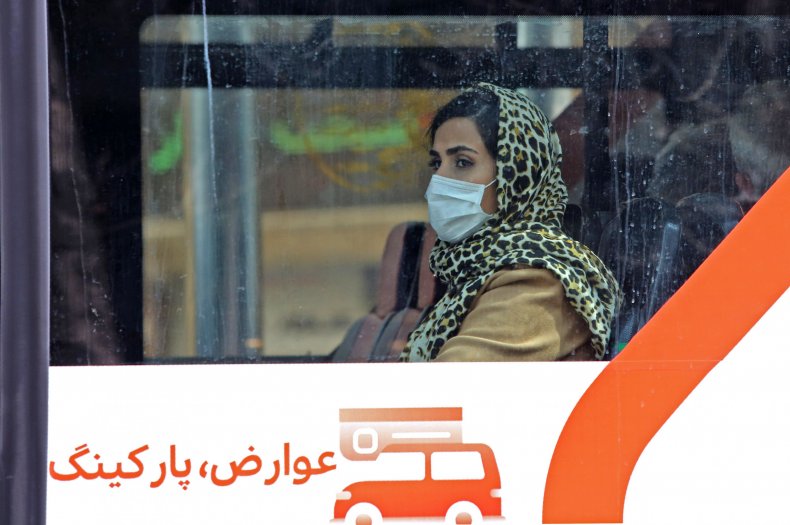 A woman wears a protective mask while riding a bus in Tehran on February 24. Iran’s government has vowed to be transparent after being accused of covering up the coronavirus outbreak in that country. ATTA KENARE/AFP/Getty Images

Specifically, Mansoori highlighted the statement released last month by students of Iran’s Amirkabir University of Technology during widespread protests that immediately followed the government’s delayed acknowledgment of its role in the accidental shoot-down of Ukraine International Airlines Flight 752. That incident, which killed 176 people, nearly half of them Iranians, came amid a dramatic escalation in tensions with the U.S., and students assigned blame to both nations.

“In recent years, the presence of the United States in the Middle East has done nothing but sow chaos and disorder. We have long understood where we stand in relation to this aggressive power,” said the statement, which Jadaliyya translated into English and posted online. “Nonetheless, we also understand that U.S. adventurism in the region cannot be an excuse to justify domestic repression.”

The students asked: “If these days ‘national security’ is on the tip of everyone’s tongue, the time has come for us to ask what they mean by security—for which groups, classes, and social strata?”

Now, Mansoori says, “the Islamic Republic is in a position where they must answer that question.” He added: “Hopefully, they have the means to do so.”

But just as the coronavirus outbreak began to worsen in Iran, the country’s political current shifted. Sunday’s parliamentary elections, already plagued by a historic low voter turnout and the rejection of thousands of mostly reformist candidates, resulted in a resounding victory for conservatives who are critical of efforts to engage the U.S. diplomatically.

Iranian hard-liners were skeptical of the 2015 nuclear deal that lifted international sanctions and have increasingly felt vindicated since the Trump administration’s 2018 decision to walk away from the agreement and impose unilateral economic restrictions on Tehran. While the State Department has said that these sanctions did not include humanitarian goods, some companies have proved unwilling to export even critical supplies for fear of triggering a U.S. government backlash.

Ahead of the recent elections, one Iranian official, speaking on the condition of anonymity, told Newsweek that “currently Iran can produce about 95 to 97 percent of our needs. Even Iran is exporting medicines to other countries in the region.” As for the remaining medicines, they “are important ones we need” and “there are problems in acquiring them because the United States has imposed those sanctions.”

The Iranian official said that fellow citizens, including the country’s increasingly restive youth, “are following international news, they know the U.S. is responsible for the sanctions.” The White House has encouraged fellow signatories China, France, Germany, Russia and the United Kingdom to also walk away from the nuclear accord, which is struggling to survive without substantial Western support.

“One of the side effects of the U.S. and European approach to the nuclear deal is that it has proven to people that engagement will fail,” the official said. “The message they have sent is that if you engage with the outside world, it will not be reciprocated. That is a very bad message.”

In addition to potentially hampering Iran’s ability to battle the new coronavirus, U.S. sanctions have hurt citizens’ ability to access information regarding the disease and its proliferation. Article 19, a London-based organization advocating for freedom of expression and freedom of information around the world, said Monday that Iranians were unable to access Johns Hopkins University’s real-time coronavirus database because of U.S.-imposed economic restrictions, not government censorship as some had initially alleged.

The map is hosted by ArcGIS Online on Amazon Web Services, which has banned most of its services in Iran in order to comply with U.S. sanctions. As of Monday, the tracker had registered some 79,441 cases and 2,620 deaths,

The disease’s epicenter has been identified as the Chinese city of Wuhan, capital of Hubei province. Since emerging as a public health crisis late last year, the disease has spread from China to at least 28 other countries. The impact on Iran is now the deadliest outside of East Asia.

Already suffering from sanctions-related shortages and internal mismanagement, the Iranian economy was expected to take a further hit as neighboring countries closed off their borders and others canceled flights in fear of the disease spreading. In Lebanon, one of Iran’s economic lifelines, calls have risen to completely suspend routes to and from Iran after a woman traveling from the Islamic Republic became the Mediterranean country’s first confirmed coronavirus case on February 21.

To make matter worse, the intergovernmental Financial Action Task Force announced that same day that it was re-blacklisting Iran because of its failure to comply with international treaties. Secretary of State Mike Pompeo commended the move, saying it would “protect the world from terrorist-financing threats emanating from Iran.”

Pompeo said earlier this month that the U.S. was prepared to pledge $100 million to help China and other countries battle the coronavirus. Asked by Newsweek on Monday whether there were any plans to support Iran’s fight against the disease, the State Department did not respond before initial publication but provided comments the following day as the crisis in Iran worsened.