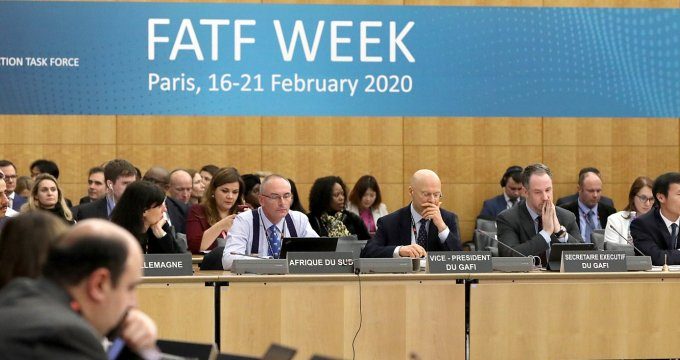 Bourse and Bazaar | Esfandyar Batmanghelidj: The Financial Action Task Force (FATF), a global body that sets standards to combat money laundering and terrorist finance, has placed Iran back on its infamous “blacklist,” following the failure of Iranian policymakers to enact two key bills in accordance with an action plan set in 2016.

The FATF statement, issued on Friday at the conclusion of the body’s latest plenary meeting, calls on members to “to apply effective countermeasures” following Iran’s failure to implement “the Palermo and Terrorist Financing Conventions in line with the FATF Standards.”

Such countermeasures include increase monitoring, reporting, and auditing of Iran-related financial transactions for all financial institutions worldwide. While members can decide how to reimpose the countermeasures, the decision taken by FATF serves as a kind of external validation of the Trump administration’s claims that the Iranian financial system is regularly used to facilitate money laundering and terrorist finance on a massive scale. This characterization is a principle justification for the administration’s “maximum pressure” sanctions campaign and U.S. officials had been dogged in pressuring FATF to call “time out” on Iran’s reform process.

The FATF decision will be deeply disappointing to many officials in the Rouhani administration who had expended extraordinary political capital to try and get the necessary legislation enacted, succeeding in getting four key bills passed by parliament, but only managing to have two bills enacted into law. Opposition by hardliners had been fierce — the FATF issue was linked to the slow-rolling crisis around the nuclear deal and the Trump administration’s sanctions campaign. The politicization of the action plan reforms — both in Tehran and in Washington — was perhaps unprecedented in the history, putting “the task force is between a rock and a hard place,” as Tom Keatinge, as RUSI Director of the Centre for Financial Crimes and Security Studies, has recently observed.

The FATF’s decision could have a significant impact on Iran’s economy, but likely indirectly. Iranian officials who advocated for implementation of the action plan insisted that failure to do so would lead to international banks, including banks in Russia and China, to cut ties with Iran. More precisely, the reimpositon of countermeasures means that it will be exceedingly difficult for Iran to open any new cross-border financial channels. But the countermeasures set to be reimposed, including FATF’s exhortation of its members to impose enhanced supervision and reporting requirements for financial institutions handling Iran-related payments reflect a level of oversight already adopted by the few global financial institutions that continue to transact with Iran. For example, European officials do not expect the FATF decision to interfere with the operationalization of INSTEX, the mechanism established to support European trade with Iran, given the longstanding policies of the banks on which INSTEX will rely.

Existing banking channels are unlikely to be constricted for the express reason that Iran is back on the blacklist — although this does not preclude that the FATF decision will be used as a timely excuse to stop handling Iran-related payments by some banks.

The more likely damage to Iran’s economy will arise from the setback that FATF’s decision represents for the wider push for financial transparency reforms in Iran, which including everything from calls for greater fiscal transparency to the adoption of international standards for accounting. In May of last year, I wrote about how this broad campaign was suffering under the pressures of a “financial war” waged by the Trump administration. Although “transparency has become a discourse and ongoing demand” in Iran, to use the words of one reformist parliamentarian, a pervading paranoia got in the way of reforms, including those required by the FATF.

As I wrote at the time, many Iranians increasingly feared that when sanctions were being applied too aggressively, any increase in financial transparency was “akin to exposing the location of a piece of critical infrastructure and leaving it vulnerable to attack.” The Trump administration sought to actively stoke this paranoia through its use of public messaging and sanctions designations, causing a significant rift with European partners engaged in a technical dialogue with the Rouhani administration over the reform process.

I have been closely following the FATF issue for three years, during which time I have had the opportunity to discuss the action plan and its implementation with American, European, and Iranian officials as well as business leaders engaged in trade between Europe and Iran. There remain many unknowns about the economic impact and the damage the countermeasures will have. But what is profoundly clear is how easy it was for the Trump administration to seek to interfere with the apolitical work of FATF and the fragile process of financial transparency reforms in Iran, even though that process was driven in large part by the concerns of the Iranian electorate around systemic corruption.

In this way, the FATF experience offers a cautionary tale. To whatever extent the current nuclear deal will remain resilient in the face of the Trump administration’s maximum pressure and reduced compliance from Iran, and to whatever extent a new deal may be strengthened to avoid a repeat of the current crisis, any diplomatic reset with Iran will require greater protection of the myriad technical processes of reconnection and reform that will be necessary to ensure that promises are delivered. We promised to give Iran a chance. We failed those who tried to take it.

This article was originally published by Responsible Statecraft.