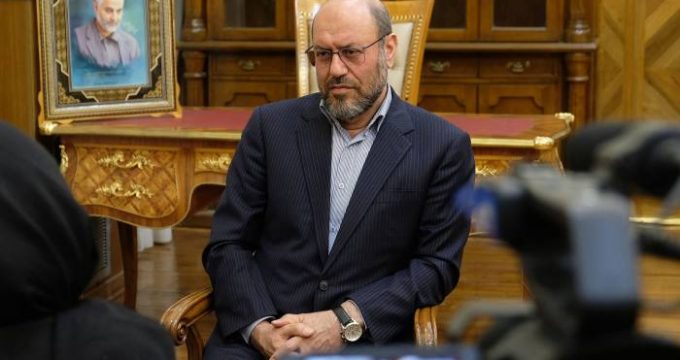 Iran sustains military spending in face of US sanctions

Iran has sustained its military spending in the face of debilitating US sanctions, a military adviser to the supreme leader has said in a rare interview, dismissing the Trump administration’s claims that its maximum pressure strategy has forced Tehran to slash its defence budgets.

Iranian officials acknowledge the impact sanctions have had on their economy, which has been plunged into a deep recession as US president Donald Trump has ramped up the pressure on the Islamic republic.

But Brigadier General Hossein Dehghan told the Financial Times that Tehran had not “made any cuts to the budgets of our military organisations”.

“Militarily, today we are definitely in a better situation than three years ago when Mr Trump came to power, in all aspects — from staff, organisation to equipment. And we will be better in five years if Mr Trump is re-elected,” said Gen Dehghan, a former top commander in the elite Revolutionary Guards who is under US sanctions himself. “In the region, since the formation of Isis and the rise of insecurity, we have used all our capacity to organise, train and consult our allies.”

The republic’s official military spending has risen in Iranian rial terms since Mr Trump began imposing sanctions, according to government budgets. The rial has plummeted against the dollar, but Iran relies heavily on its indigenous arms industry. The full extent of Iran’s defence spending is opaque and support for regional proxies is not made public.

Trump administration officials, citing Iran’s budget, have claimed one of their key successes has been to force Tehran to reduce its military spending by almost 30 per cent, including cuts to the guards’ budgets, and to weaken the republic’s ability to support its proxies.

The stand-off between Iran and the US began after Mr Trump unilaterally withdrew from the 2015 nuclear deal that Tehran sealed with world powers, and imposed the most severe sanctions ever on the republic.

Mr Trump’s stated aim is to pressure Tehran to renegotiate the nuclear deal, rein in its missile programme and end its support for proxies Washington alleges destabilise the region. Iran and the US came close to war last month after Qassem Soleimani, Iran’s most powerful commander, was killed in an American drone strike. Soleimani’s Quds Force, the wing of the guards responsible for overseas operations, has for years mentored and armed regional militant groups and led Iran’s fight against Isis.

His killing dealt a stunning blow to the republic, and pictures of the commander adorned posters and billboards across the country. But while Iranian officials admitted that the charismatic general’s death was a great loss, they insisted their military institutions would not be weakened.

Providing a rare glimpse into the theocratic leadership’s thinking, Gen Dehghan hinted at Tehran’s survival strategy: no retreat from sponsoring regional militant groups or developing its missile programme; no talks with Washington but avoid all-out war; and a bet that Mr Trump’s policies will ultimately serve Iran by fuelling anti-American sentiment and empowering its proxies.

The US strategy “is costing them and it costs us. But who is the winner now? Today, we believe our influence in the region has increased despite all this pressure,” said Gen Dehghan. “We will never abandon our regional allies . . . We are not players, we are revolutionaries.”

Iran boasts the largest ballistic and cruise missile force in the Middle East and the number of Iranian-backed fighters in the region ranges from 150,000 to 250,000, according to the US-based Center for Strategic and International Studies, with allied groups in Iraq, Syria, Lebanon and Yemen.

The US blames Iran for the missile and drone attack that struck Saudi Arabia’s oil infrastructure in September, temporarily knocking out half the kingdom’s crude output. Washington and Israel also accuse Iran of transferring missiles and technology to its proxies — Israel has launched scores of strikes against Iranian-affiliated targets in Syria in recent years.

When questioned about US and Israeli allegations that Iran has helped Lebanon’s Hizbollah and Iraqi militias to set up missile manufacturing plants in Syria, Lebanon and Iraq, Gen Dehghan said: “If they ask us for help, we will.”

Tehran also used its arsenal to retaliate against the US after the assassination of Soleimani, firing more than a dozen missiles at Iraqi bases housing American forces. No troops were killed and Washington and Tehran moved to de-escalate, but Iran’s supreme leader Ayatollah Ali Khamenei suggested Iran would take other retaliatory measures in the future.

Gen Dehghan said “complimentary blows will happen over time” with the aim of driving US forces from the region. But he added that Tehran would not stage attacks against the US “unless America does [against Iran]”.

He said Iran “saw no reason to order” its proxies to act, but would not “prevent them from acting”. Iranian-backed Iraqi militias have continued to fire rockets near the US embassy in Baghdad and at bases hosting American soldiers since Soleimani’s assassination. They have caused limited damage, but reflect a pattern of harassment of US interests in Iraq, where Iran has deep influence and which is home to more than 5,000 US troops.

Gen Dehghan reiterated that Iran did not want a “full-blown war” with the US, but said negotiations would be pointless. “The US thinks we are in a weak position and need to negotiate,” he said. “The US wants to negotiate with us to say ‘why do you have missiles, why are you present in the region and why do you have military capabilities?’ What kind of negotiations are these?”