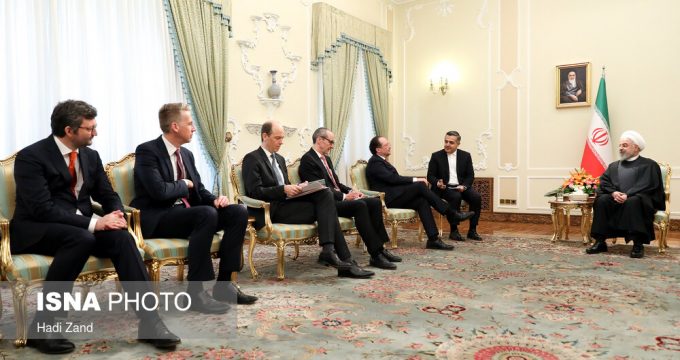 President in a meeting with Austrian FM: US sanctions like coronavirus; panic more than reality

President.ir – Stating that the United States’ sanctions are like coronavirus, which the panic it makes is more than what it really is, President said, “The European Union is expected to stand up to America’s illegal actions”.

Speaking with the Minister of Foreign Affairs of Austria on Sunday, President Hassan Rouhani described Tehran-Vienna relations very good and friendly and said, “The two countries have good potentials, especially in economic fields, for cooperation and we hope that Austria disregards the Americans’ illegal pressures in developing its cooperation with Iran”.

“We believe that the Joint Comprehensive Plan of Action (JCPOA) can still be saved,” he said, adding that the nuclear deal does not just belong to Iran, Europe or the P5+1, but it can contribute to regional and global peace and security.

Emphasising that the nuclear deal could have been a good basis for building new trust between us and the West, including the European Union and the United States, Dr Rouhani said, “Iran has been committed to the deal for its own part”.

Referring to US’ food and drug sanctions against the Iranian people, the president said, “Implementing these sanctions is a terrorist act and we expect the European Union to fulfil its humanitarian duty”.

The President stated that the Islamic Republic of Iran has proposed Hormuz Peace Endeavour (HOPE) initiative with the aim of establishing peace and security in the region, and it has been welcomed, adding, “All issues that our region is facing are because of the United States’ illegal interference in regional issues”.

The President expressed hope that Iranian-Austrian cooperation in bilateral and regional fields would be further expanded and that the Austrian Foreign Minister’s visit to Iran would contribute to a positive development in bilateral relations with the European Union.

At the same meeting, Minister of Foreign Affairs of Austria Alexander Schallenberg also delivered the warm greetings of his country’s President and Chancellor to the Iranian President and described the two countries’ relations friendly and long-standing.

He also emphasised more efforts for development of relations and cooperation between the two countries, especially in trade and economy.

Schallenberg also referred to Vienna’s hosting of Iran-P5+1 nuclear negotiations, describing the JCPOA a turning point in building confidence in the region and the world, adding, “Protecting the nuclear deal is our and EU’s main policy, and we will do our best in this regard”.

Schallenberg described Hormuz Peace Endeavour (HOPE) as the roadmap for peace and security in the region and the Persian Gulf.

“In our view, the HOPE Initiative can be a roadmap for peace and stability in the region, and Austria welcomes the initiative for building confidence and is keen to play a positive role in this process,” he continued.