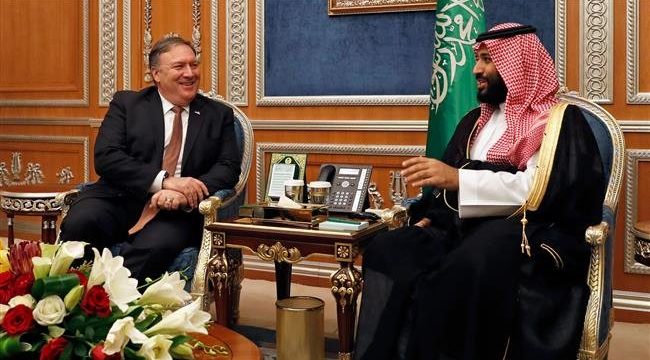 Bloomberg | Nick Wadhams: Secretary of State Michael Pompeo toured a Saudi Arabian air base where the U.S. has deployed fighter jets and Patriot missile batteries to defend against Iranian attacks, a visit meant as a show of force against Iran and a sign of strong U.S.-Saudi ties.

The visit Thursday to Prince Sultan Air Base, a barren, sprawling facility two hours southeast of Riyadh that covers an area almost the size of Bahrain, allowed Pompeo to inspect a squadron of F-15E fighter jets that deployed here in January and get a classified briefing from the commanders of a Patriot missile unit protecting against Iranian drone and missile strikes.

“The force posture that’s here today — not only the American presence here today, but the work we’ve done alongside our Saudi partners to better prepare for strikes of that nature — is very real,” Pompeo told reporters during the visit. “There is a heightened sense of security for facilities like that, and we’re more capable today than we were.”

Pompeo, on the tail end of a week-long trip to Germany, Africa and the Middle East, originally planned to visit the Khurais oil field, which was targeted by missiles and drones in September in attack officials have pinned on Iran, but had to change plans because of bad weather. The stop at Prince Sultan, which hosts about 2,500 U.S. service members, let him demonstrate how the U.S. now believes it has the military might in place to deter future attacks against a key ally.

But the focus on U.S. forces also underscored how President Donald Trump has struggled to fulfill his 2016 campaign promise to draw down American troops from “endless wars” in the Middle East. Instead of pulling forces, the U.S. has sent thousands more personnel to the region as part of its “maximum pressure” campaign against Tehran.

Pompeo met with Saudi Arabia’s King Salman earlier in the day and went from the air base to a meeting and dinner with Crown Prince Mohammed bin Salman. He didn’t say if he would raise the case of Jamal Khashoggi, the Washington Post columnist who was killed and dismembered by Saudi agents in Turkey in 2018.

The U.S.-Saudi relationship has endured other significant strains in recent months: In December, a 21-year-old Saudi Air Force trainee killed three sailors in an attack at a military base in Florida, and the crown prince has been implicated in a phone hack against Amazon.com Inc. chief executive Jeff Bezos. Saudi officials have denied involvement in the hack.

The kingdom has also been criticized for the case of Walid Fitaihi, a Saudi-American citizen who was detained in 2017 and alleges he was tortured in prison. He is barred from leaving Saudi Arabia.

Pompeo’s focus, however, was clearly to highlight the solid support the Trump administration is giving Saudi Arabia, which it sees as a crucial partner in isolating Iran. The kingdom was the first country Trump visited after taking office in 2017.

“They are an important ally and partner,” Pompeo said. “At the same time, we continue to make clear to them our expectations with respect to a broad range of human rights issues, which include the return of people that are being held that aren’t being held in a way that we think is consistent with the rule of law.”

Adding to the pressure on Tehran, the U.S. announced sanctions Thursday on members of an Iranian government agency that it says rigs elections in the country by disqualifying candidates who don’t echo the political ideology of Ayatollah Ali Khamenei.

Earlier in the trip, Pompeo warned that Iran must be held accountable for its proxies’ attacks on American forces in Baghdad, warning that such violence can’t become routine. He said the maximum-pressure campaign against Iran would continue, rejecting Iranian President Hassan Rouhani’s claim that his country won’t negotiate until the U.S. lifts the sanctions choke-hold that has strangled the economy.

“You need look only at the ayatollah’s Twitter feed to know that these are people who have a deep disdain for the very fundamental ideas that we hold so dear in the United States,” Pompeo said Thursday. “Our aim is to change that behavior from the regime, but it remains a great deal of work to do to deliver on that ultimate objective.”