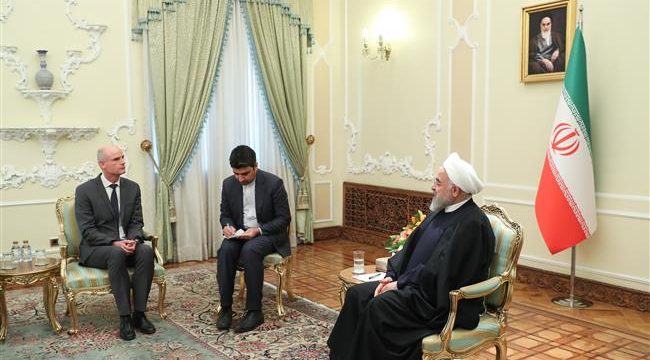 Iran open to talks with EU on ways to save 2015 nuclear deal: President Rouhani

Press TV – Iranian President Hassan Rouhani says the Islamic Republic has not closed the door to talks with the European Union on possible ways to save a 2015 landmark nuclear deal between Iran and major world powers following the US’ unilateral withdrawal from it.

“We believe that the nuclear deal served the interests of the region and the world and the US move harms all [nations] and even the American people,” Rouhani said in a meeting with Dutch Foreign Minister Stef Blok in Tehran on Saturday.

“Over the past 21 months since the US exit from the JCPOA (the nuclear deal, officially known as the Joint Comprehensive Plan of Action), the European Union has unfortunately failed to take effective steps in line with mutual relations and the fulfillment of its commitments under the JCPOA,” he added.

Pointing to the US’ “illegal, unilateral and cruel” sanctions against the Iranian nation, which also include medicine and food, Rouhani said, “It is expected that the world’s free nations vociferously condemn these unlawful sanctions.”

US President Donald Trump, a stern critic of the historic deal, unilaterally pulled Washington out of the JCPOA in May 2018, and unleashed the “toughest ever” sanctions against the Islamic Republic in defiance of global criticism in an attempt to strangle the Iranian oil trade.

Elsewhere in the meeting, the Iranian president pointed to centuries of “good and cordial” relations between Tehran and Amsterdam and said, “We are keen to expand political and economic relations with the Netherlands.”

He added that Iran’s foreign policy is based on “constructive interaction” with countries, in particular enhanced relations with the EU.

Rouhani also emphasized that the US presence and policies in the region are the root causes of regional insecurity and said, “If the US stops its terrorist measures and uncalled-for interference, our region will be naturally safe.”

According to the Iran’s principled policy, regional security should be guaranteed by countries in the region, he said, adding that the presence of foreign forces in the Persian Gulf region under the name of different coalitions would not contribute to regional security.

Netherlands will make efforts to save JCPOA: Blok

The Dutch foreign minister, for his part, said his country would make efforts to preserve the JCPOA and stressed the importance of continuing dialog as a means of solving problems.

Blok added that Amsterdam has openly and privately told the Americans that their move to withdraw from the JCPOA, which is an international agreement, was not the right thing to do.

He also called for the promotion of relations between the two countries in all fields, particularly in the economic sector, and expressed hope that the Netherlands would be able to play a more dynamic role in the implementation of a non-dollar direct payment channel — officially called the Instrument in Support of Trade Exchanges (INSTEX).

The three European signatories to the JCPOA unveiled late in January 2019 the long-awaited mechanism meant to safeguard their trade ties with Tehran following the US withdrawal from the nuclear deal and in the face of the harsh sanctions imposed by the United States against the Islamic Republic.

In its initial stage, INSTEX was supposed to facilitate trade of humanitarian goods such as medicine, food and medical devices, and later be expanded to cover other areas of trade, including Iran’s oil sales. However, it has not resulted in any trade deals so far.

Earlier in the day, Blok, who is in Tehran at the head of a delegation, held two rounds of talks with Iranian Foreign Minister Mohammad Javad Zarif about issues of mutual interest and the latest regional and international developments.