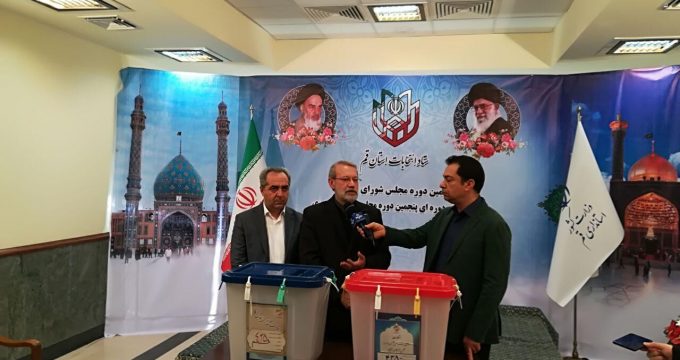 IRNA – Majlis Speaker Ali Larijani attended parliamentary and Assembly of Experts elections in Iran on Friday, saying that parliament is one of the decision-making pillars for the Islamic system.

Casting his vote in Qom, 140 km south of Tehran, Larijani described parliament as the key pillar of the religious democracy.

The 11th parliamentary elections and the mid-term election for the Assembly of Experts began in Iran on Friday morning.

All important decisions about the lives of the people and future of the country have been approved in Majlis, so it takes an important place.

Highlighting the role of people in elections, Larijani said when the people vote, they not only help national bodies manage the country, but also express their security and political support for the country.

Before the Feb 21 elections, the US and its media outlets tried in vain to make the Iranian people disappointed to put more pressures, Larijani stressed adding that they will be compelled to ignore their demands when they witness high turnout of the people in elections.

Today is a good day for the Iranian nation, the speaker noted.