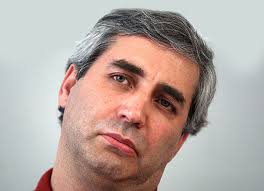 Al-Monitor | Rohollah Faghihi: Ebrahim Hatamikia, Iran’s award-winning director known for his films on the Iraq-Iran War, has made headlines again with his new film “Exit,” a political drama about a group of farmers driving their tractors in protest to the presidential palace.

Iran’s moderates accused the director of making the film to please the country’s hard-liners, pointing out that the film was financed by Owj Arts and Media Organization, which is tied to the Islamic Revolutionary Guard Corps (IRGC). During a Feb. 8 press conference, Hatamikia denied that he has ever made films on request, or ever will.

The son of an Iranian Azeri family, Hatamikia started his career in the film industry as a scriptwriter. He directed his first film, “The Identity,” in 1986 and followed it with a series of documentaries on the Iraq-Iran War, known as the “sacred defense” in Iran. The ideals of the 1979 Islamic Revolution and the heroism of Iranian soldiers sacrificing their lives for their homeland were recurrent themes in his earlier films.

Over the past four decades, Hatamikia has made contentious social and political films, including “From Karkheh to Rhein” (1993) and “The Glass Agency” (1998). The former narrates the story of an Iranian veteran passing away in Berlin as the result of the chemical weapons Germany sold to Iraq during the war, and the latter portrays the isolation and destitution of Iraq-Iran War veterans once society and the government forget their sacrifices and leave them to fend for themselves.