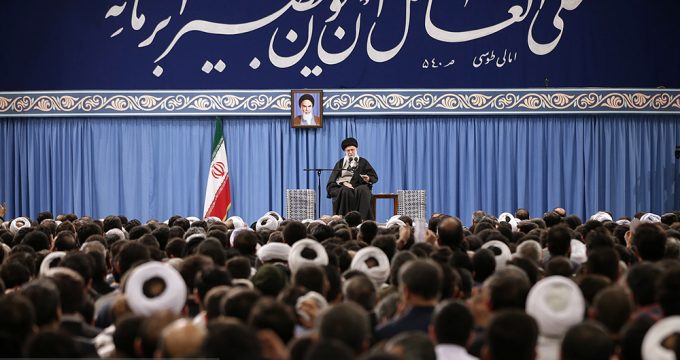 Al-Monitor – Three days before Iran’s parliamentary elections, the country’s Supreme Leader Ayatollah Ali Khamenei renewed his call on the nation for a show of support to the clerical establishment. Ayatollah Khamenei told Iranians again in a Feb. 18 speech in Tehran that voting was not just a national responsibility but a religious duty as well.

“America” and “the enemy,” recurrent motifs in Ayatollah Khamenei’s speeches, were central to his latest address at yet another “critical time” for Iran. “The polls will defuse the US’ evil intentions,” he told the crowd, describing a large turnout as a sign that Washington’s pressure campaign against Tehran has not worked. “A weak parliament will adversely change the course of Iran’s fight against the enemies,” he added in an attempt to convince Iranians that their security depends on their participation in the vote.

Campaigning is underway across Iran, there there are no indications of any heated competition in the capital Tehran and the other major cities. Weeks ahead of the vote, the hard-line Guardian Council barred a majority of prominent candidates representing the Reformist camp from the race.