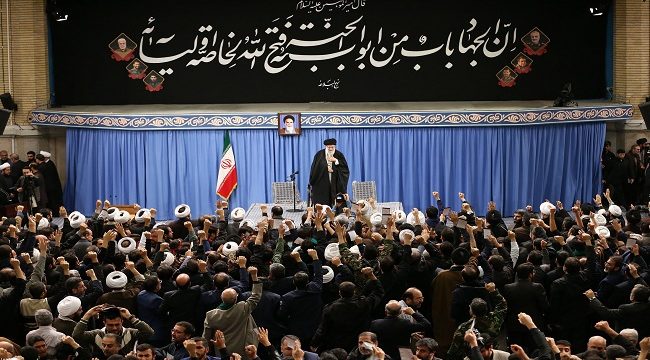 IRNA – Supreme Leader of the Islamic Revolution Ayatollah Seyyed Ali Khamenei said on Tuesday that the enemy aims at separating the youths from the Islamic System but they will totally fail.

Ayatollah Khamenei made the remarks while addressing thousands of people from East Azerbaijan on the anniversary of the provincial people’s uprising against the toppled Pahlavi regime one year before the victory of the Islamic Revolution in Iran in 1978.

He said that during the upcoming elections (to be held this Friday), like the previous instances of anniversary of the Revolution and the commemoration of Lieutenant-General Qasem Soleimani, the enemy will fail once again in disappointing Iranian youth.

Iran’s Lieutenant-General Soleimani and Iraq’s Abu Mahdi al-Mohamdes were assassinated by the US terrorist army by the order of President Donald Trump on January 3. They had a long record of fighting the US-made terror groups, including the ISIS. Millions of people took to the streets to commemorate the two heroes and the other eight military men who were killed by the US.

The Supreme Leader said that the election is a point of pride and an honor for the Islamic Iran and also reinforces the country.

Outlining enemies plots againt Iran, he said that the US has confessed that it has set up numerous think tanks which focus on methods of separating people from the Islamic System.

However, the Leader stressed, they they will fail this time as before.

He said that friends and foes are watching Iran now.

The enemy wants to know the results of its propaganda and economic pressures on the people wishing to see Iranians betrying commitments, Ayatollah Khemeni added.

And the friends are worriedly watching to see what happens, he said.

He said he has always told friends not to be concerned about the behaviour of the Iranian people because they know what they should do and they do to right.

The elections will neutralize many “wicked intentions” that the US and the Zionists have in mind, he said.

Ayatollah Khamenei said that Iran should become stronger to disappoint the enemy and to nip their plots in the bud, adding that one of the points of strength is the parliament.

He said recently “top-notch fools” are commenting on the Iranian people and the Islamic System and the elections; but they are just saying something to influence the elections.

He added that some parts of their comments are out of frustration. After they assassinated General Soleimani, they figured out that they had something without proper calculations. They were criticized both by the Americans and other countries. Their move backfired.

Now they keep talking to make up of their mistake, he said.

Commenting on the growing weakness of the US, he said the US has beautified its facade, but actually it is the country with the biggest foreign debt in the world – more than $22,000 billion. And the class divide is horrifying in the US and it is more than ever now.

He quoted one of the US senators as saying that under Trump’s administration, $100 billion dollars have been added to the wealth of five of the US billionaires, three of whom have collectively a wealth equal to half of the US.

He added that 80% of the US workers are poor and one out of five Americans is able to buy their prescribed medicines. The divide between the white and Indian American have tripled in the last 50 years.

Ayatollah Khamenei said that Trump says the conditions have improved. “Yes, but not for the general public; just for the billionaires.”

Referring to Jimmy Carter’s comments, he said as put by one of the previous US presidents, the US is “just an oligarchy, with unlimited political bribery.”

Discrimination, class divide, poverty, destitution, and crime have plagued the US, he said, adding that the US will sink like the Titanic though it is well-decorated.

Ayatollah Khamenei said that Iran is not against any race or nation, it against arrogance and oppression, and the peak of arrogance in the world is now the US, which is in the hands of the wealthy and Zionist corporations. The world loathes it.