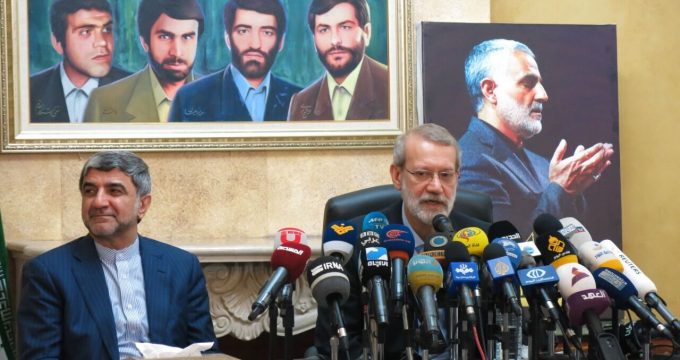 In a press conference in Beirut late on Monday, he added that Iran and Lebanon have signed cultural and scientific agreements that should be implemented.

“We know no limitation for academic cooperation and Iran has various universities that Lebanese students can forge technical, scientific and artistic communications,” he said.

Iranian senior official also reiterated that what will solve Lebanon’s problem is its people and government’s resolve, he said, noting that if they stand on their own feet will be dignified, but if they hold hand for help to the US and Saudi Arabia, their crisis will remain unresolved.

If the Lebanese think that the US is the source of generosity and go after it they are mistaken, as Iran realized in the nuclear issue that the Americans know nothing but to harm and they are seeking to help Israel dominate the region, Larijani said.

“We understand US anger, as the Iraqi parliament has approved exit of the US forces from the country and Lebanon also dealt with the protests wisely,” he said.

Iraqi people and government do not like the US to set up base in the country and assassinate their guest, Larijani said, noting that any people and country that have national zeal will certainly show reaction to the US’ behaviors.

The assassination of the Lieutenant General Soleimani, commander of the Quds Force, revealed US’ weakness and subtlety more than its power. It also showed that Americans couldn’t do anything else to achieve their goals. They resorted to assassination, which is dirty work, he said.

Elsewhere in his remarks, he added that Hezbollah is a great asset of Lebanon which has blocked the Israeli regime’s aggression and tyranny.