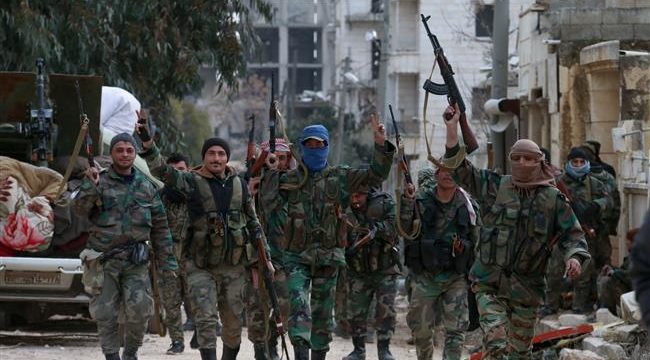 Syria recaptures most of Aleppo ahead of Russo-Turkish talks

Press TV – Backed by Russian air power, the Syrian army has made unprecedented advances in the northwestern Aleppo Province, which borders Turkey, as Ankara is about to take up its grievances about Damascus’ breakthroughs with Moscow.

The Syrian military has brought back most of the province under sovereign control. Russian aircraft targeted terrorist positions there in advance to facilitate government movement on the ground.

Reuters referred to the towns of Anadan and Haritan as some of the places liberated in the joint counterterrorism push.

“There is very rapid advance by the [Syrian] regime in this area,” a London-based war monitor said.

In all, the army liberated 23 villages to the west and north of Aleppo, from where terrorists shelled Aleppo, the country’s second-largest city.

Aleppo’s residents took to the streets afterwards in celebration, waving the national flag and honking the horns of their cars.

rior to the headway, the Syrian military had liberated the M5 Highway between Aleppo and Damascus, the fastest route linking the two cities.

he gains have coincided with similar advances in the neighboring province of Idlib. The province hosts the largest remaining concentration of militants and Takfiri terrorists in the Arab country since foreign-backed militancy began in Syria in 2011.

Turkey, however, has been uneasy with Syria’s progress in Idlib, claiming that the Syrian offensive there killed 13 of its troops this month. It has threatened to attack the Syrian military unless government forces abandoned the liberated areas, and asked Moscow to “stop” Damascus. Ankara has also made unverified claims that it has killed dozens of Syrian soldiers in one alleged retaliatory strike.

At one point, Turkish President Recep Tayyip Erdogan even threatened to end its involvement in a peace process for Syria.

Turkey has 12 observation posts in Idlib, set up as part of an Iran-brokered agreement with Russia to de-escalate the situation near the Turkish border. Some of the posts, however, now lie in the territory that has been recaptured in joint Russo-Syrian efforts.

President Bashar al-Assad has said his country is determined to liberate all Syrian land.

Meanwhile, Turkish Foreign Minister Mevlut Cavusoglu said during a briefing at the Munich Security Conference that Turkish and Russian officials would discuss Ankara’s complaints about the Syrian advances in Moscow on Monday. Cavusoglu also said he had met with some US lawmakers at the Munich conference and called for Washington’s support.

Also on Sunday, the White House said US President Donald Trump had called Erdogan, conveying Washington’s “desire to see an end to Russia’s support” for Syria.

urkey has so far sent thousands of troops and many convoys of military equipment to reinforce its presence in northwestern Syria.

Over the past four years, the Turkish military has staged at least two unauthorized incursions into northern Syria. And the US, too, has been leading a number of its allies in establishing an unlawful military presence in the Arab country since 2014.