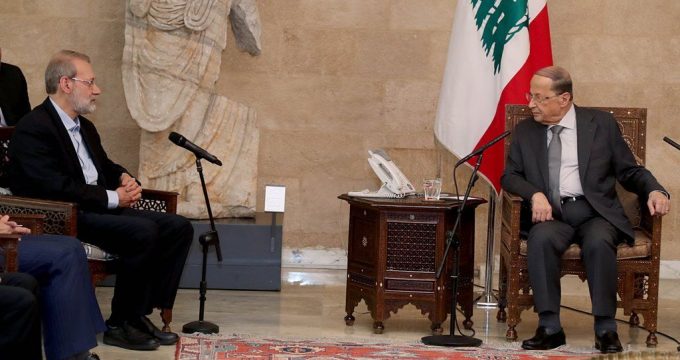 IRNA – Parliament Speaker Ali Larijani on Monday submitted a letter from the Iranian President to his Lebanese counterpart Michel Aoun in which Hassan Rouhani had called for expansion of Tehran-Beirut ties.

The letter explored ways to expand relations and President Hassan Rouhani invited the Lebanese president to travel to Iran.

Larijani met with President Aoun at the Baabda Palace in eastern Beirut today and emphasized Iran’s stance on the need for the return of the Palestinian refugees and Syrian refugees to their homeland, as well as dismissing their permanent residence in Lebanon.

Permanent resettlement of the Palestinian refugees and Syrian refugees in Lebanon is in violation of the constitution and the UN Security Council resolutions, including resolution 149 which calls for the return of refugees to their home countries.

During their visit to the Baabda Palace, Larijani and President Aoun exchanged views on the situation in the Middle East, recent developments in the Syrian army’s advances in Aleppo and Idlib provinces, the importance of stability and security in the country, the situation of refugees, as well as the current situation in Iran and Lebanon.

Ali Larijani congratulated the Lebanese President on forming a new government and said that the Islamic Republic of Iran is ready to help Lebanon improve its economic situation.

The Speaker added that Iran and Lebanon can develop commercial and financial exchanges and cooperate directly or multilaterally in the utilities, gas, agricultural, oil and petrochemical industries.