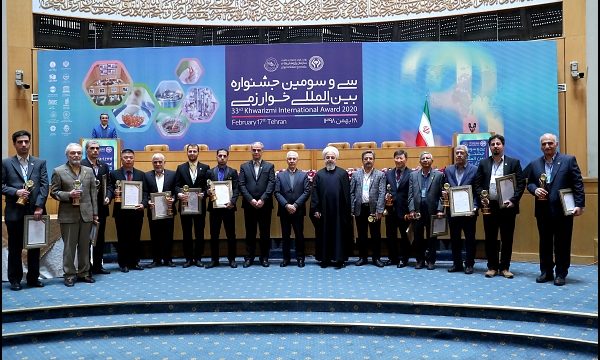 Press TV – Iran has held the latest edition of its prestigious Khwarizmi International Award festival, presenting more than a dozen domestic and foreign research projects with the event’s special accolade.

The 33rd edition of the event was held at the International Conference Center in Tehran on Monday in the presence of President Hassan Rouhani; Science, Research, and Technology Minister Mansour Gholami; and Vice President for Science and Technology Sourena Sattari, IRNA reported.

Addressing the event, President Rouhani said the United States sanctions and “maximum pressure” campaign against Iran had failed to stop its scientific progress.

“The society should have hope in the future. It is a source of pride that sanctions have not managed to break us,” he said.

The award-winning projects this year, 10 conducted by Iranian researchers and five by foreign contestants, included those related to development of solar energy, synthesis of the raw materials required for making peptide radiopharmaceuticals, research and development in the area of medicinal substances, and malware analysis platform.

The US has since 2018 been attempting to break Iran with an array of measures, including sanctions targeting various sectors of the Iranian economy and science as well as cyber sabotage and assassinations.