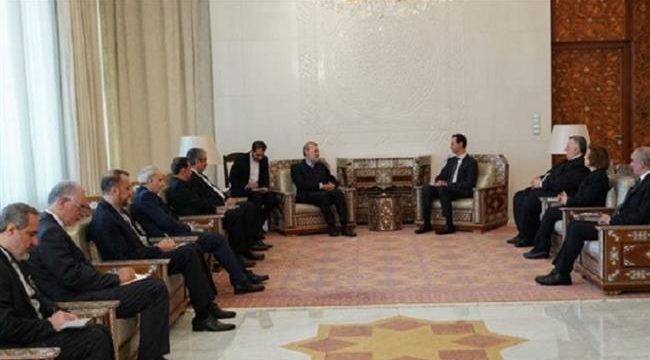 He made the remarks in his meeting with Syrian President Bashar al-Assad in Damascus on Sunday.

In this meeting, Syrian President Bashar al-Assad said that terrorists have taken civilians as hostages and use them as human shields, emphasizing that this cannot be allowed to continue.

Syrian people persist on cleansing the whole land and territory of the country from the terrorist groups, he highlighted.

For his part, Iranian Parliament Speaker Ali Larijani emphasized the significance of recent victories gained by the Axis of Resistance against terrorists in Syria’s Idlib and added, “Tehran’s support of Damascus in the fight against terrorists will continue. Islamic Republic of Iran is confident that Syria will be able to continue fighting against terrorists until the liberation of all its areas from the terrorists.”

Iranian Parliament Speaker Ali Larijani arrived in Syrian capital Damascus this morning at the head of a high-ranking parliamentary delegation.

Larijani is scheduled to meet with Syrian Prime Minister Imad Khamis to talk about the prospects of trade and economic ties between Iran and Syria.

After his meeting with Syrian officials, Larijani then will leave Syria for Lebanon.