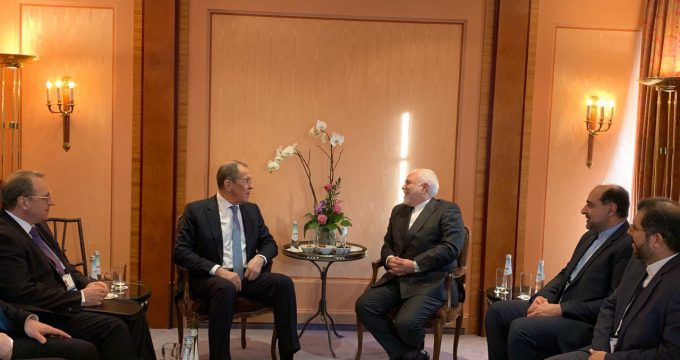 “Met with Russian Foreign Ministerov on the margins of @MunSecConf. Discussions included #MEPP and #JCPOA – as coordinator I remain committed to listen to all sides and keep the #NuclearDeal alive,” Borrell tweeted late on Saturday after meeting Lavrov in Munich.

The Russian Foreign Ministry also said in a statement about the meeting between Lavrov and Borrell that “a discussion was held on the situation in the Middle East and North Africa, as well as on the Joint Comprehensive Plan of Action [JCPOA] for the Iranian nuclear program. Some issues of Russian-EU relations were touched upon.”

Lavrov’s meeting with Iranian Foreign Minister Javad Zarif also took place on the sidelines of the Munich conference on Saturday. The two foreign ministers discussed the strengthening of multifaceted Russian-Iranian cooperation, among other issues.

“An in-depth exchange of views also took place on a number of issues on the international agenda, including the situation in Syria and issues related to the Joint Comprehensive Plan of Action”, the Russian foreign ministry said in a statement after the meeting, according to Sputnik.

he Joint Comprehensive Plan of Action (JCPOA) was signed in Vienna in 2015 between the Islamic Republic and the P5+1 group of states comprising the US, the UK, France, China, and Russia plus Germany.

However, in May 2018, the United States pulled out of the agreement and re-imposed sanctions on Iran.

Iran set off a number of nuclear countermeasures to retaliate against the US withdrawal and its subsequent re-imposition of sanctions, but also to prompt the deal’s European sides to meet their commitments under the JCPOA to keep up their trade with Tehran despite Washington’s bans.

Meanwhile, Germany, France and the United Kingdom have threatened to trigger the JCPOA dispute resolution mechanism in order to return Iran to resume its commitments. Iran says it will reverse the countermeasures once Europe starts to live up to its own JCPOA commitments in safeguarding Iran’s economic interests.