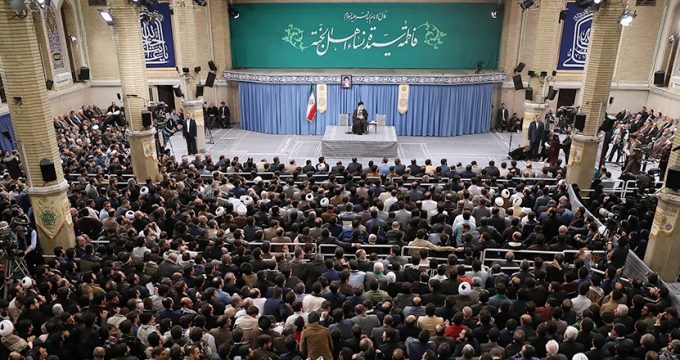 Iran needs to be strengthened by empowering will and insight of its youth: Leader

“Today, the important need of our country is for our youth to be equipped with various weapons and means of soft war, which consist of willpower and the power of reason,” the Leader said in a Saturday meeting with religious orators.

“I have repeatedly said about the need to strengthen the country,” Ayatollah Khamenei said.

“One of the central components of this is to equip the youth with the means of thought and correct insight in the knowledge of the Ahl al-Bayt,” he added, referring to the progeny of the Prophet (PBUH).

“The young generation, in which we have much hopes – because the future of the country is in your hands – has to be firm like steel, with strong will and insight in order to know what it wants to do and how to achieve it,” the Leader said.

Achieving that, Ayatollah Khamenei said, “requires knowledge of the Ahl al-Bayt which vaccinates society, the Islamic establishment and Muslims”.

Religious orators in the Shia tradition, known as “Madah” in Farsi, play a central role in organizing religious ceremonies in Iran, most notably for mourning the martyrdom of the third Shia Imam and the grandson of Prophet Mohammad (PBUH).

Imam Hussein (AS) was martyred along with dozens of his companions during a last-stand battle against the tyrant of the time, Yazid I, I in 680 AD.

The Leader likened mourning ceremonies following the assassination of Lieutenant General Qassem Soleimani and his comrades earlier in January to mourning held for Imam Hussein.

“Mourning for the martyrs is not a sign of weakness; it is a mourning that demonstrates resolve and determination which illustrates the sacred emotions of a human being amidst the battle field,” Ayatollah Khamenei said.

“In the recent funerals for our dear martyr, you can see what a major event unfolded across the country; not only in our country but also beyond it,” the Leader said.

“The endurance of the Iranian nation against the wild American monster – which has stunned international observers – stems from such knowledge,” of the Ahl al-Bayt, the Leader added.

Ayatollah Khamenei noted that the Islamic teaching to trust God and not fear the enemies had enabled Iran to achieve progress throughout the years despite enemy schemes.

“Nobody would believe that Iran would reach its current status in regards to its political status and regional influence and progress in scientific and technological fields in the early days of the Islamic Revolution,” the Leader said.

“However, the Iranian nation put its trust in God. did not fear any power and was able to achieve such progress,” Ayatollah Khamenei said.