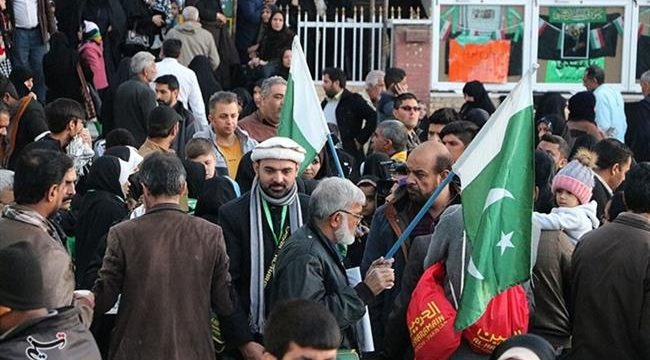 Press TV – Tens of thousands of people in Iraq and Pakistan have held ceremonies to mark the 40th day after the martyrdom of top Iranian General Qassem Soleimani and his Iraqi trenchmate, Hashd al-Shaabi commander Abu Mahdi al-Muhandis.

Iraqi people from various governorates flocked to the holy city of Najaf on Friday to pay tribute to al-Muhandis and General Soleimani on the 40th day (called Arba’een) after their martyrdom in a US attack near the Baghdad International Airport.

The Iraqis, coming from Baghdad, Dhi Qar, Basra, Maysan, Karbala, Wasit, Diyala, Nineveh, Saladin, and al-Qadisiyyah governorates, headed to Wadi-us-Salaam cemetery close to the holy shrine of Imam Ali (AS) in Najaf in order to visit the tomb of Abu Mahdi al-Muhandis.

The huge crowds of people chanted “Death to America” and “Death to Israel”, carrying the flags of Iraq and anti-terror resistance groups as well as photos of al-Muhandis and General Soleimani.

Dozens of such ceremonies have been held in various Iraqi cities since the January 3 US assassination of the Iranian and Iraqi commanders and their comrades.

Also on Friday, a huge number of Pakistanis came all the way from the city of Karachi to the Iranian city of Kerman, where General Soleimani is laid to rest.

The Pakistani mourners believe what General Soleimani has done is unprecedented in the history of mankind, and they feel duty-bound to follow his path.

Earlier on Thursday, thousands of Iranians gathered at Tehran’s Imam Khomeini Grand Prayer Grounds (Mosalla) to mark 40 days since the martyrdom of Gen. Soleimani and his companions.

US forces assassinated General Soleimani, the former commander of the IRGC’s Quds Force, along with Abu Mahdi al-Muhandis, deputy head of Iraq’s Popular Mobilization Units (PMU), known as Hashd al-Sha’abi in Aabic, and their companions by targeting their car on January 3.

Days after the US terrorist attack, Iran carried out a retaliatory missile strike against two US-occupied military bases in Iraq.

After the Iranian retaliatory strike, Leader of the Islamic Revolution Ayatollah Seyyed Ali Khamenei said the missile attack was just “a slap”.

The US military says more than 100 American soldiers have been treated for traumatic brain injuries following Iran’s retaliatory strike in Iraq, a number that was more than 50 percent higher than previously disclosed.

Trump had said a day after the Iranian missile strike that “We suffered no casualties, all of our soldiers are safe, and only minimal damage was sustained at our military bases.”