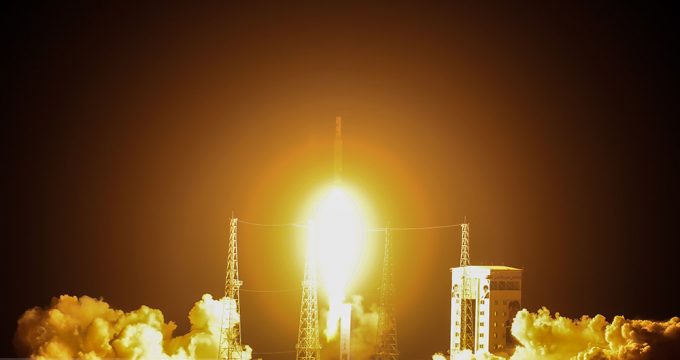 The rise and fall of satellite Zafar

Financial Tribune – A mid cries of Allah-o-Akbar, the Simorgh satellite launch vehicle blasted off from the Imam Khomeini Spaceport in central Iran, burning an afterimage into the spectators’ retinas.

Gathered on a wind-blasted hilltop, several dozen people, including officials and a motley group of journalists, watched as Simorgh SLV roared to life at 19:15 p.m. local time (1545 GMT) on Saturday, Feb. 9.

Simorgh was carrying satellite Zafar (Triumph in Persian and Arabic). If successful, the mission would have been the first time the Islamic Republic put a satellite into an orbit 540 km above the Earth.

However, the launch failed. The rocket carried Zafar to an altitude of 541 kilometers, but did not reach the 7,400 meters per second speed required for putting it into orbit. At the height of the mission, the SLV’s speed went past 6,500 meters per second. Failing to deliver its payload, the rocket self-destructed and Zafar fell into the Indian Ocean.

The launch took place from the fortified Imam Khomeini Space Center, south of Semnan in the Dasht-e-Kavir desert. Two tents were pitched to shelter observers in the face of harsh winds blowing from the south.

A few minutes before the launch countdown, people were notified via loudspeakers that had just played Islamic recitations and the national anthem.

Participants, mostly men with few women journalists and government officials among them, raced out of the tents and huddled behind a yellow barricade tape. They shuffled around to find a better vantage point.

One of the participants had come prepared with a pair of binoculars. He positioned himself in front of the group, brandishing the handheld device. Yearning to get the rare view of the rocket launch from close, people beseeched him to lend them the vision enhancement device.

After handing over the binoculars, the guy teased that he should charge others for using the device but still continued to pass it around.

The rocket carried Zafar to the 540-kilometer altitude, but did not reach the 7,400 meters per second speed required for putting it into orbit. Failing to deliver its payload, the rocket self-destructed and Zafar fell into the Indian Ocean

Then the final call came. The crowd drew a sharp deep breath. The countdown began and from the midst of the swirling white smoke, Simorgh lifted off. All eyes were on the white and blue rocket, as it dissolved into the pitch-black night sky while its roar kept echoing on the hilltop.

The onlookers then dashed back to the tents where monitors linked with the mission’s control room were set up. The picture switched to a graph detailing the rocket’s altitude and speed with a voice reading the data. As the rocket soared and gained speed, people in the tent shouted cheers of approval.

However, the speaker’s voice suddenly lost vigor and declared matter-of-factly, “We’ve lost contact with the satellite.”

In the other tent, ICT Minister Mohammad Javad Azari Jahromi was on the phone. Encircled by bodyguards and close allies, he whispered in the receiver, “And the satellite? What about the satellite?”

A shadow fell over his face and he rushed toward a motorcade that escorted him off the premises.

The encampment gates closed behind Jahromi and his motorcade, leaving observers stranded on the hilltop. The euphoria that dominated the atmosphere a few minutes ago had given way to silent grief.

Unwilling to swallow the bitter truth, voices trailed off into uncertainty. Some tried to console others.

A young aide to minister Jahromi, Effat Hayati, with her black eyes bright with tears said, “Failures hold the seeds of future triumphs.”

An official with Iran Space Agency tried to explain what had happened based on the limited information he had received.

Later, the gates opened and buses shuttled journalists and other spectators back to the space center.

During the ride, participants stared at the full snow moon of February floating above the desert.

After a 30-minute drive from the hilltop, the passengers were to be reunited with their mobile phones at the entrance of the center.

Before reaching the gates, two white SUVs speeding from behind intercepted the bus carrying journalists. Jahromi got off one of the SUVs and climbed into the bus.

Trying to keep his tone bright and wearing a weak smile, Jahromi addressed the passengers. He explained what had happened to the SLV and its payload, adding that he believes failures should be reported transparently.

While disembarking from the bus, Jahromi said, “Sorry, the satellite didn’t make it.”

Someone from the back of the bus called out, “Maybe next time.”

With a bitter smile, Jahromi raised a fist in the air and responded, “God willing, God willing.”

Before, during and after the launch, social media platforms frequented by Iranians became hotbeds of heated debate over the Islamic Republic’s space program.

Some users questioned the necessity of the program when Iran is facing economic difficulties caused by sanctions and many can barely make ends meet.

Others argued in favor of the program as a source of national pride and pointed to revenues that a successful space program might generate for the country.

The same questions and arguments occupied the minds of journalists covering the satellite launch. Many of them decided to focus on the news aspect of the event for now and cover the public discourse later.

This article tried to be an unfiltered descriptive image of the launch and what people experienced at the site during those tense minutes.