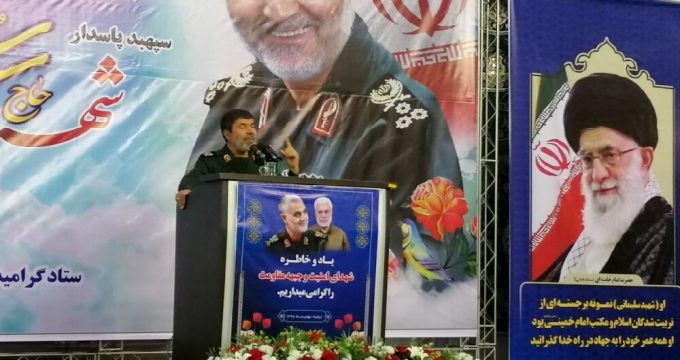 IRGC: Assassination of General Soleimani beginning of end for US in region

IRNA – The spokesman for the Islamic Revolution Guard Corps (IRGC) said on Thursday that the assassination of Lieutenant-General Qasem Soleimani by the arrogant US regime in Baghdad was the beginning of an end for the US presence in the region.

Speaking in the ceremony to commemorate General Soleimani in Orumiyeh, northwestern Iran, Brigadier-General Ramezan Sharif said that like the way General Soleimani’s mission was to reinforce the Resistance to counter the Zionist regime; his death, too, was also a help to that cause.

Sharif said that all the plots of the US have failed because of the Resistance and General Soleimani’s efforts; noting that the assassination of such great Generals could never prevent enemies’ fall.

After the US assassinated General Soleimani, he said, the IRGC slapped them in the face by targeting their most advanced airbase in Iraq, Ain al-Assad, which disgraced them so their expulsion from the region is a certain fate for them.

He added that the people slapped the US for the second time with a huge turnout on the 41st anniversary of the Islamic Revolution on February 11.

Lieutenant-General Soleimani fought and uprooted the US-made terror group Daesh (ISIS) in Iraq and Syria. US President Donald Trump ordered to assassinate him in Baghdad on January 3.

In the terrorist attack, nine other people at Soleimani’s motorcade were killed including the Commander of the Iraqi Popular Forces, Abu Mahdi al-Mohandes.

The two commanders’ funeral procession in Iran and Iraq amazed the world. Millions of people all over the world mourned their assassination by the US.

In response to the assassination, Iran destroyed the best-equipped airbase of the US in Iraq, Ain al-Assad, with several missiles.

Soleimani assassination, US assassination of General Qassem Soleimani, US withdrawal from region February 13, 2020
Photos: Unprecedented snowfall surprises people of northwestern Iran
40 days ago, US killed a man who first rushed to Iraq’s aid against Daesh