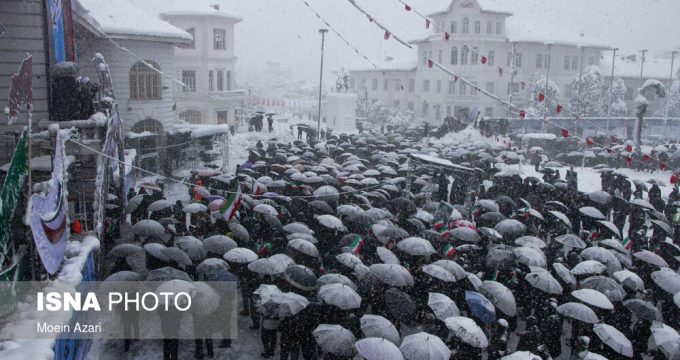 RT – Massive crowds went out across Iran, as it’s celebrating 41 years since the Islamic Revolution. In some areas people braved cold weather and had to hold up umbrellas alongside banners, as heavy snowfall poured down on them.

It was snowing heavily in parts of Iran, but people have still staged massive demonstrations, denouncing US sanctions and maximum pressure campaign during the 41st anniversary of the Islamic Revolution. The rallies took place amid flare-up of tensions between the two countries.

Large crowds gathered at the iconic Azadi Square in Tehran and in other cities across Iran on Tuesday. Braving heavy snowfall and cold weather in some areas, people carried national flags and photos of Major General Qassem Soleimani, the commander of the elite Quds Force killed in a US drone strike in Iraq last month.

Traditional chants “Death to America” and “Death to Israel” were heard, as some came out to denounce US sanctions and US President Donald Trump’s recently-unveiled peace plan for the Middle East, which was rejected by the Palestinians.

Addressing the crowd in the capital, President Hassan Rouhani said that the Islamic Revolution is “not limited” to Iran and will affect other Muslim states, ultimately “driving the American superpower from the region.”

He pointed out earlier that Washington’s ‘maximum pressure’ campaign against Tehran has failed to make Iranians “bend the knee.”

A great nation will never yield to bullying, unjust and wrong remarks as well as undue pressures.

The celebrations take place in the midst of one of the worst periods in the ever-deteriorating US-Iranian relations. Washington sanctioned Iran’s Atomic Energy Organization, among other entities, in its latest expansion of penalties on Tehran two weeks ago. This came after a brief war scare following the assassination of Soleimani, who the US accused of plotting terrorist attacks against its personnel.

Iran retaliated to Soleimani’s murder by firing rockets into Iraqi bases housing US troops. The barrage left no casualties, but it was later revealed by the Pentagon that more than 100 servicemen have suffered traumatic brain injuries.