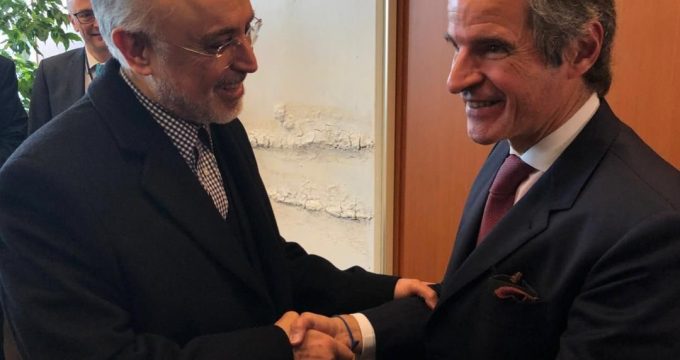 Iran not to succumb to pressure despite being open to talks: AEOI chief

Press TV – Head of the Atomic Energy Organization of Iran (AEOI) Ali Akbar Salehi says Tehran is open to talks on the country’s nuclear program but will not bow to pressure for its decisions.

Salehi made the remarks during a meeting with the new director general of the International Atomic Energy Agency (IAEA), Rafael Grossi, in Vienna, on Tuesday.

“[Iran’s] Relations with the IAEA are very good and based on mutual understanding, and as an international authority, this organization and its decisions should not be influenced by political inclinations,” Salehi said.

In his meeting with Grossi, the AEOI chief also underlined that, “Iran welcomes negotiation and logic but will not make any decisions under pressure.”

Tehran and six major world powers — the United States, Britain, France, China, Russia and Germany — signed a nuclear deal, officially known as the Joint Comprehensive Plan of Action (JCPOA), in 2015, which was ratified in the form of a United Nations Security Council resolution.

But US President Donald Trump, a stern critic of the landmark agreement, unilaterally pulled Washington out of the JCPOA in May 2018, and unleashed the “toughest ever” sanctions against the Islamic Republic in defiance of global criticism in an attempt to strangle the Iranian oil trade.

Under Washington’s pressure, the three European signatories to the JCPOA have so far failed to protect Tehran’s business interests.

Last May, Iran began to gradually reduce its commitments under the JCPOA to both retaliate for Washington’s departure, and trigger the European trio to respect their obligations towards Tehran.

On January 5, Iran took a fifth step in reducing its commitments, and said it would no longer observe any operational limitations on its nuclear industry, whether concerning the capacity and level of uranium enrichment, the volume of stockpiled uranium or research and development.

Iran says its retaliatory measures are reversible as soon as the European signatories find practical ways to shield mutual trade from the US sanctions.