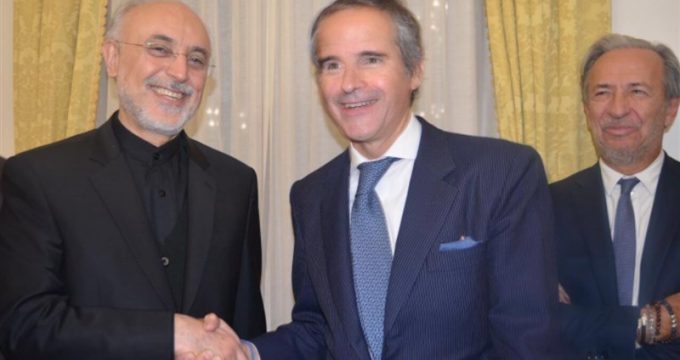 Tasnim – The International Atomic Energy Agency (IAEA) Director-General Rafael Grossi offered his congratulations to the Iranian people and government over the anniversary of the Islamic Revolution’s victory in 1979.

Grossi attended a ceremony in the Iranian ambassador’s residence in Vienna to congratulate Head of the Atomic Energy Organization of Iran (AEOI) Ali Akbar Salehi and other Iranian diplomats on the 41st anniversary of the Islamic Revolution.

The IAEA chief is slated to hold a meeting with Salehi in the coming days about Iran’s nuclear activities and steps in reducing its commitments under the 2015 nuclear deal known as the Joint Comprehensive Plan of Action (JCPOA).

Salehi arrived in Vienna on Sunday to attend the third biennial International Conference on Nuclear Security.

The IAEA is organizing the third International Conference on Nuclear Security: Sustaining and Strengthening Efforts (ICONS 2020), at its headquarters in Vienna from February 10 to 14.

The conference will reportedly feature a ministerial segment during which ministers will deliver national statements and adopt a Ministerial Declaration.

The previous conference, held in 2016, attracted over 2,000 participants, including 47 government ministers, from 139 Member States and 29 intergovernmental and non-governmental organizations.