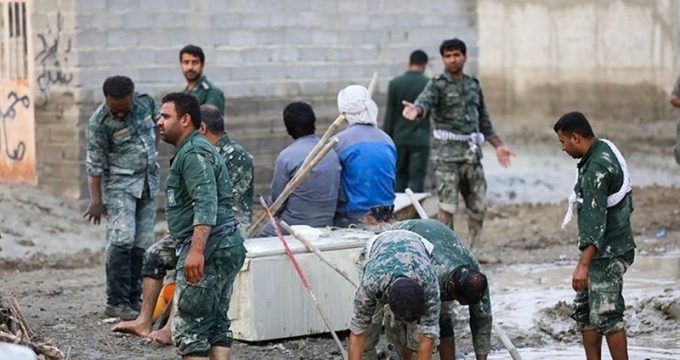 “The Southeast Quds Headquarters of the IRGC Ground Force is continuing the process of providing (relief) services in the flood-stricken areas south of Sistan and Balouchestan Province,” Shahram Eskandari told Tasnim.

“Currently, we are concentrated (on relief efforts) in Qasr-e-qand city,” he said, adding that so far, the IRGC forces have distributed about 920 tons of food by helicopter and other vehicles to flood-hit people in the province.

The commander went on to say that the engineering equipment and facilities of the Southeast Quds Headquarters of the IRGC Ground Force are also used in the relief operations in the areas.

Iranian Defense Minister Brigadier General Amir Hatami recently paid a visit to the province and said the ministry has mobilized all its facilities and equipment to help the affected people.

The Armed Forces have always sided with the “noble and patient” people of Islamic Iran and are always ready to provide relief for them in critical situations, the minister stated.

Following heavy downpours and torrential rains recently, some parts of the two provinces of Sistan and Balouchestan and Kerman were affected by massive flash floods last month.

Sistan and Balouchestan was affected in the most severe way due to record-breaking rainfall in years.