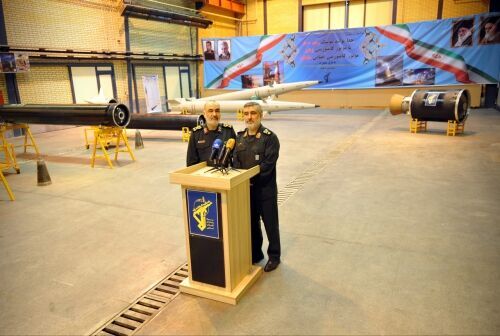 Speaking in a ceremony to unveil Raad-500 missile and the new propelling systems for missiles and satellite carriers, Major General Salami said that the IRGC Aerospace Force started producing composite motors and bodies, which reduces the mass and increases the velocity.

Major General Salami said that the real war is over becoming stronger and that the cutting-edge achievements unveiled today are Iran’s key to be present in the space.

He added that the Raad Missile is half the weight of Fatih, its range is 200 km more. It is also cheaper and more precise. This technology can be used for all the Iranian missiles.

The IRGC commander also said that the IRGC has achieved the technology that allows controlling missiles in the vacuum, which is a leap in missile production.

He added that the missiles are the deterrent power and honor of Iran, and a valuable asset in Iranians’ possession.

The Commander of the Aerospace of the IRGC, Brigadier-General Amir Ali Hajizadeh, said that the technology brings about the ability to control solid-fuel rockets, spacecraft, satellite-carriers, and shield-penetrating missiles in the space.