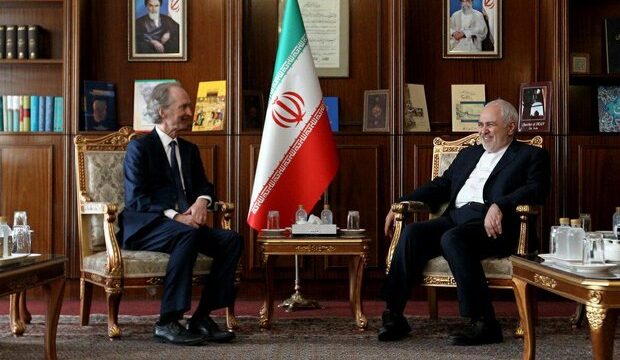 Press TV – Iranian Foreign Minister Mohammad Javad Zarif says political solution is the only way to solve the Syrian crisis, voicing Tehran’s readiness for cooperation with Damascus toward the goal.

In a meeting with the visiting the United Nations special envoy for Syria, Geir Pedersen, in Tehran on Saturday, Zarif expressed the Islamic Republic’s full readiness for any cooperation aimed at solving the Syrian crisis in line with respect for the Arab country’s sovereignty, independence, unity and territorial integrity.

The UN envoy, for his part, briefed the top Iranian diplomat on his stance regarding the political process in Syria and issues of common interest.

The meeting comes as Syrian government forces are advancing against foreign-backed Takfiri militants in the northwestern Idlib province, tightening the noose around the extremists in their last major stronghold.

Idlib and the area north of Aleppo province form part of the only large territory in the hands of terrorists after the Syrian military managed to vanquish the foreign-backed terrorists across the country and bring back almost all of the Syrian soil under government control.

The Syrian army declared the start of an offensive against foreign-sponsored militants in Idlib on August 5 last year.

Syrian government forces, backed by allied militants from popular defense groups, on Friday managed to establish full control over a strategic region in the southern countryside of the country’s northern province of Aleppo from the al-Qaeda-linked militants.

Local sources, requesting anonymity, told Press TV that Syrian troops and their allies captured al-Humayra after “intense battles” with the foreign-sponsored extremists, adding that the army inflicted heavy losses on the Takfiris and their equipment.

“The Islamic Republic of Iran stresses [the need] to protect lives of civilians and prevent them to be used as human shields, and is prepared to help resolve the conflicts between Turkey and Syria,” Khaji told the UN’s Syria envoy in a meeting.

He highlighted the significance of fighting terrorism and implementing the Sochi agreement.

Under the Sochi agreement, all militants in the demilitarized zone that surrounds Idlib, and also parts of the provinces of Aleppo and west-central province of Hama, were supposed to pull out heavy arms by October 17 2018, with the Takfiri groups having to withdraw two days earlier.

During the meeting, Pedersen and Khaji also discussed the latest developments in Syria, particularly in Idlib, the Arab country’s Constitutional Committee, its reconstruction process, the task force on the exchange of detainees and abductees, the status of the refugees, as well as other humanitarian issues.

They exchanged views about joint cooperation between the Islamic Republic and the United Nations to find a solution to the Syrian crisis through political channels and dialog.

The UN envoy, for his part hailed Iran’s support for the Constitutional Committee to continue its work.