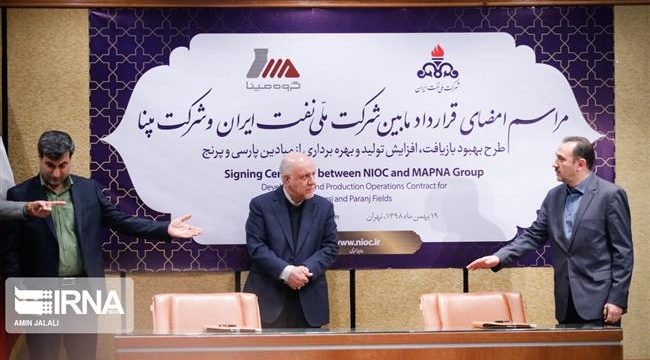 Press TV – An Iranian energy engineering conglomerate has been awarded with a deal worth $1.4 billion to develop two oilfields southeast of the country.

Iranian Oil Ministry’s news service Shana said on Saturday that the deal signed with MAPNA Group is meant to improve recovery rate and increase production at Parsi and Paranj oilfields, located in the province of Kuzestan and near the border with Iraq.

Iranian Oil Minister Bijan Namdar Zanganeh and senior provisional officials oversaw the signing of the contract in Tehran between CEOs of Mapna and the National Iranian South Oil Company (NISOC), which operates the two oilfields.

The official IRNA news agency cited NISOC chief Ahmad Mohammadi as saying that MAPNA would invest nearly $1.4 billion in the project for development of Parsi and Paranj, two reserves that hold around 12 billion barrels of oil together.

Mohammadi said the contractor is expected to increase production at the two fields from the current 52,000 bpd per day to 85,000 bpd at the end of the 10-year development project.

That would mean an increased income of around $1.65 million a day for Iran’s Oil Ministry, said the report by Shana, adding that the project would create many jobs for local people while using the expertise of various Iranian firms that have become more active in the oil and gas sector at a time the country faces the American sanctions.

Mapna and NISOC signed a draft agreement for development of Parsi and Paranj oilfields in August. Mapna is expected to drill 29 wells in the fields and carry out repair works at eight others. Its CEO Abbas Aliabadi said on Saturday that the company has already started drilling a well at Parsi.