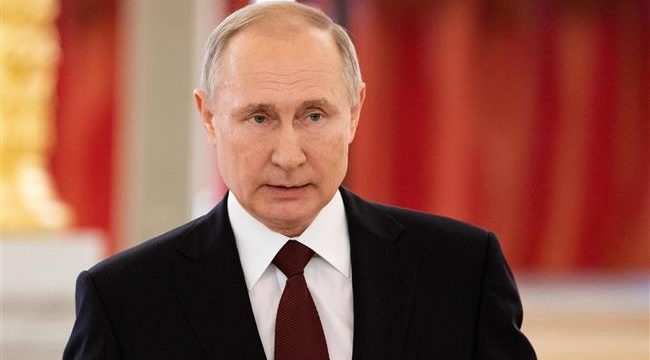 Putin made the remarks during a ceremony where he received the credentials of new foreign ambassadors, including the Iranian envoy, Kazem Jalali, in Moscow on Wednesday.

He lauded Iran-Russia relations as friendly and based on mutual respect, and called for reinforcement of ties between the two sides in all areas.

Iran and Russia cooperate with each other in important joint ventures, particularly in the field of peaceful nuclear technology, railway and economic projects, Putin said.

Iran and Russia have been both helping the Syrian government in the fight against terrorism at the request of Damascus.

Iran has no troops on the ground in Syria but has been providing the Arab country with advisory military assistance.

Russian jets have been carrying out air raids against targets belonging to the Daesh Takfiri terrorist group and those of other terror outfits inside Syria since September 2015. The airstrikes have helped Syrian forces advance against anti-Damascus militants.

In his remarks, the Russian leader voiced his country’s determination to keep alive the 2015 nuclear deal between Iran and major world powers and called on “all the remaining parties to the JCPOA (nuclear deal) to live up to their commitments to safeguard the landmark international agreement.”

“The Iran nuclear deal is important for preservation of regional and global stability and we make efforts to keep the Joint Comprehensive Plan of Action,” he added.

Tensions intensified in the region after the US left the JCPOA in 2018, defying its multi-party nature and the fact that it has been ratified in the form of a United Nations Security Council resolution. Washington also reinstated the sanctions that had been lifted under the deal.

Last May, Iran began a set of nuclear countermeasures in retaliation for the United States’ departure. The measures were also taken in return for the US’s restoration of its nuclear-related bans against Iran, and failure by Britain, France, and Germany — three European  signatories to the deal — to retain their business interactions with Iran despite the sanctions.

Putin also said that Tehran and Moscow played an influential role in the Astana process aimed at resolving the Syria conflict.

“[Our] cooperation with Iran within the Astana framework has played an effective role in the settlement of the Syria conflict,” he said.

The latest round of the Astana talks aimed at settling the Syria crisis was held on December 10-11.

The discussions have brought representatives from Syria’s warring parties to the negotiating table and resulted in the establishment of safe zones across the country.

The process toward a peaceful settlement in Syria was launched in January 2017 by Russia, Iran and Turkey in Astana, the capital of Kazakhstan, which has been renamed Nur-Sultan.