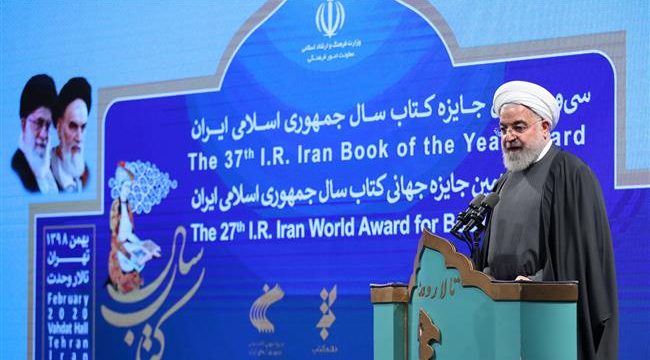 Press TV – Iranian President Hassan Rouhani slams the US sanctions against his country, saying the bans amount to acts of terrorism.

“The US is a terrorist and commits terrorist acts against Iran,” Rouhani said in a speech at a ceremony in the Iranian capital Tehran on Wednesday.

“I do not think that any country has ever imposed sanctions on [access to] medicine for a country. The Americans lie when they say they have not imposed sanctions on medicine. When they sanction the banking routes to Iran and create problems for the sales of our exports, sanctioning … our purchasing power, this means they perpetrate terrorist acts. America commits terrorism against Iran,” he added.

Rouhani said that it was the first time in history that a big power put sanctions on a nation, adding that the US had targeted the entire Iranian nation, some 83 million people, not certain individuals or entities.

“That the Americans now and again blacklist certain people is an act of deception. They actually impose sanctions on 83 million [Iranians],” he noted.

Rouhani, however, said that despite such pressures, the Iranian nation will not submit to the US demands.

“They thought we would fall on our knees in the first three months and would ask to negotiate [with them] in a way that they want, not the way we favor,” he said.

Rouhani said Iran would only negotiate in fair and logical conditions but the US seeks to make the country bow to its demands through “unfair, biased and undignified” talks, which is not acceptable to Iran or any other country.

“Iran will not yield [to pressures], this shows the Iranian nation’s power. We have stood firm and resisted,” he said.

Separately on Wednesday, the Iranian Foreign Ministry spokesman said the opening of a Swiss-US “humanitarian” channel to bring medicine to the country belies the US claim that such basic needs are exempt from Washington’s sanctions.

Abbas Mousavi said in a post on his official Twitter page that the US sanctions on banking transactions with Tehran have made it practically impossible for foreign companies to sell medicine to Iran.

“Despite the US’ false claims that foodstuffs and medicine are not under sanctions, [they] have in fact blocked any banking transaction in this regard,” said part of the tweet.

“By launching the so-called humanitarian channel to supply medicine, they officially admitted that this claim is absurd and against the ICJ (International Court of Justice) ruling, and that medicine and foodstuffs are also sanctioned, which they should not be,” the tweet said.

Mousavi had earlier dismissed as insufficient the Swiss-US “humanitarian” channel, arguing that the United States is originally banned by the International Court of Justice from subjecting Iran’s much-needed medical supplies to sanctions.

“We do not recognize any such so-called humanitarian channel,” Mousavi told a press conference on Monday. “We do not recognize sanctions [for that matter]. Medicine and foodstuffs were never subject to sanctions in the first place so they can now create a channel [for their transfer] with much publicity,” he added.

Trump’s ME plan ‘crime of century’

Rouhani also pointed to US President Donald Trump’s recently unveiled “deal of the century” and condemned the proposed deal for resolving the Israeli-Palestinian conflict as “the crime of the century.”

He said that the deal was only supported by a few countries and was even rejected by the European Union.

Addressing a pro-Israel audience at the White House with Israeli Prime Minister Benjamin Netanyahu by his side, Trump last Tuesday announced the general provisions of his long-delayed plan for resolving the Israeli-Palestinian conflict.

The US president said his proposed deal would ensure the establishment of a “two-state” solution. Trump also said Jerusalem would be the “undivided capital” of Israel.

Among other controversial terms, the Trump plan allows the regime to annex settlements in the occupied West Bank and the Jordan Valley. For the Palestinians, it would mean giving up a claim to large amounts of West Bank land — including places where Israel has built illegal settlements over the past half-century.

Palestinian leaders, who were absent during the announcement and had rejected the proposal even before its release, say the deal is a colonial plan to unilaterally control historic Palestine in its entirety and remove Palestinians from their homeland, adding that it heavily favors Israel and would deny them a viable independent state.