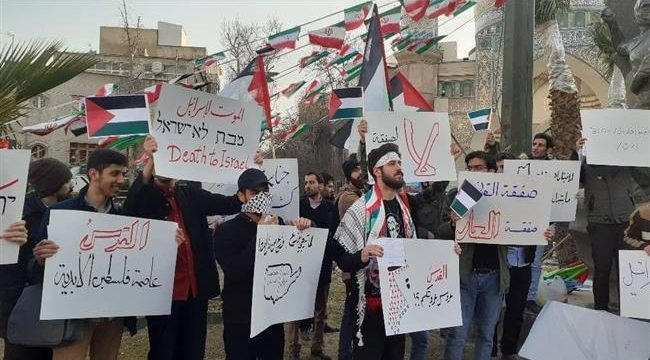 Press TV – Student organizations in Iran have censured all the provisions featured in the controversial plan laid out by US President Donald Trump on the decades-old Israeli-Palestinian conflict, stating that the scheme shows his ignorance.

In a recent joint statement, at least 55 organizations said the unjust plan indicates that Trump’s political vision, mentality and thoughts are akin to that of the age of ‘Jahiliyyah.’

Jahiliyyah is a concept referring to the period of time and state of affairs in Arabia before the advent of Islam in 610 CE. It is often translated as the Age of Ignorance.

The statement further reiterates its support for the oppressed Palestinian people in line with their right to regain their occupied land.

In recent days, Iranian students have held a series of massive demonstrations in the capital Tehran and other cities to censure the Trump administration’s self-styled plan, which seeks to legitimize further occupation of Palestinian territories by the Israeli regime.

Defying international outcry, Trump in late January announced the general provisions of the plan that he has dubbed ‘deal of century’ at the White House with Israeli Prime Minister Benjamin Netanyahu at his side.

The ‘Vision for Peace’, which all Palestinian groups have unanimously rejected, would, among other contentious terms, enshrine c as “Israel’s undivided capital” and allow the regime to annex settlements in the occupied West Bank and the Jordan Valley.

Within just hours since its launch, Trump’s proposed deal aroused a storm of indignation and opposition among people and politicians as well as international organizations.

Some believe the plan has been hugely skewed in favor of Israel.

The plan totally ignores the rights and demands of up to 15 million Palestinians around the world, leaving them out of a process that is expected to decide their fate and their future.

Opponents argue that the highly pro-Israel scheme offers no prescription for peace because it blatantly violates international law.

It strips Palestinians of their basic rights on a number of sensitive issues, including the state of Jerusalem al-Quds, the future borders of a sovereign Palestinian state, the return of Palestinian refugees driven from their homeland, security responsibility, as well as Israeli settlements built on occupied land.

Amnesty International has criticized the proposal as “a handbook for more suffering and abuses” in the occupied territories, urging the international community to reject measures set out in the deal in contravention of international law.

Earlier in his career, Trump even formally recognized al-Quds as Israel’s “capital,” and Syria’s Golan Heights as the Israeli regime’s “sovereign territory,” exceeding all his predecessors in terms of pro-Tel Aviv favors.