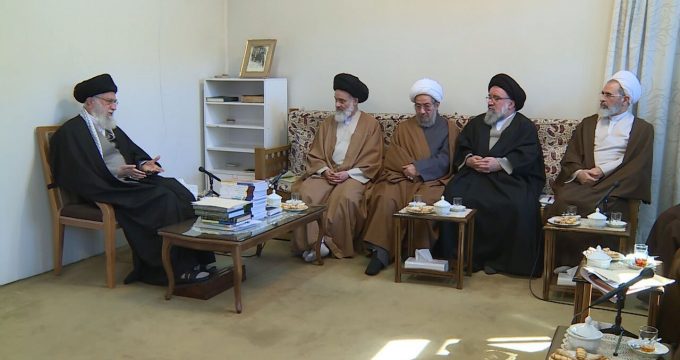 Supreme Leader: Enemy is to identify, hit points of strength of our revolution

IRNA – Supreme Leader of the Islamic Revolution Ayatollah Seyyed Ali Khamenei said on Monday that the enemy is to identify and hit points of strength of our essential foundations including the seminaries.

The Supreme Leader made the remarks in a meeting with the Supreme Council of the Seminary Council members in Tehran on Monday.

They are masterminding plots to identify top intellectual talents among the young seminary students, the Supreme Leader said.

Protecting the revolutionary passion and the young seminary students is a necessity in the light of what Imam Khomeini has said, Ayatollah Khamenei said.

In this meeting, the Supreme Leader also pointed to the significant role of the Supreme Council of Seminaries in policymaking for the education of teachers and religious educators in the society very important and appreciated the efforts of the council members and the management of the seminary.

Emphasizing on identifying hidden talents and intellectual capacities in the young seminary students, the Supreme Leader added that in various parts of the country, some great works and amazing initiatives are done by the youths, and in the seminaries and among the seminary students there are certainly such talents that need to be identified and used in intellectual circles.