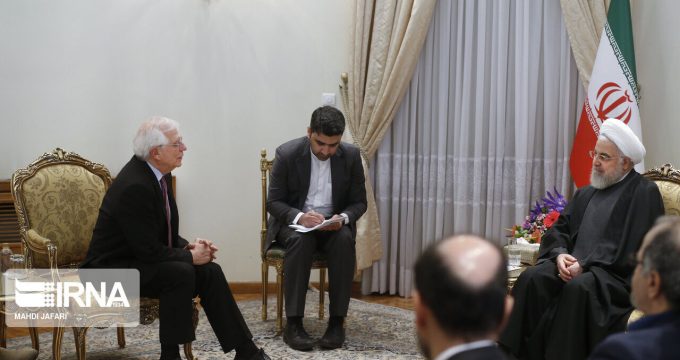 Reuters – Iran is ready to cooperate with the European Union on issues related to the nuclear deal it agreed with world powers in 2015, President Hassan Rouhani was quoted as saying on Monday by the ISNA news service.

He made his comments at a meeting with Josep Borell, the head of the EU’s foreign service, who traveled to Iran to try to reduce tensions in the Middle East after the U.S. killing of Iranian military commander Qassem Soleimani last month.

Under the deal, Tehran agreed to curb its nuclear activities in exchange for the lifting of most international sanctions, but the United States withdrew from the deal in 2018 and reimposed sanctions on Iran.

“The Islamic Republic of Iran is still ready for interaction and cooperation with the European Union for resolving issues and, whenever the opposite side completely upholds their commitments, Iran will return to its commitments,” Rouhani said.

Iran began reducing its commitments under the nuclear deal last year to put pressure on the parties remaining in the accord to protect its economy from U.S. sanctions and allow the Islamic Republic to gain the full benefits outlined in the deal.

Iranian officials have said all of their actions have been within the parameters of the nuclear deal, are reversible and that they are still committed to having their program monitored by the International Atomic Energy Agency.

But Britain, France and Germany, which with the United States, Russia and China agreed the deal with Iran, declared Iran in violation of the 2015 pact last month and launched a dispute mechanism under which the matter could be referred back to the Security Council and U.N. sanctions reimposed.

The 1968 NPT has been the foundation of global nuclear arms control since the Cold War.

Iran says it has never pursued the development of nuclear weapons.