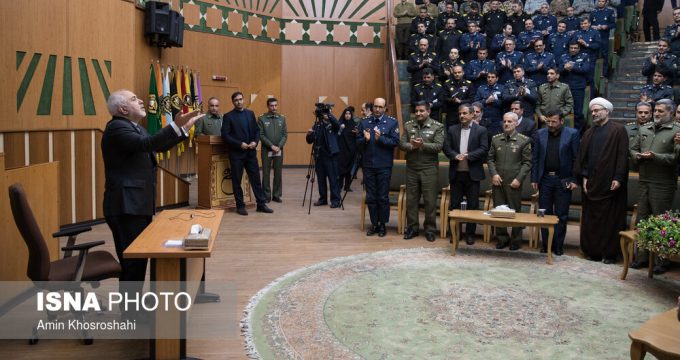 Tasnim – Iran’s Foreign Minister Mohammad Javad Zarif decried foreign parties for impeding the Islamic Republic’s investigation into the January crash of a Ukrainian jetliner near Tehran, stressing that Iran should receive the needed equipment to analyze the black box of the plane.

In a Monday speech at the Iranian Army’s University of Command and Staff, Zarif said Iran works with maximum transparency in leading the probe into the crash of the Ukraine International Airlines Boeing 737-800 which was mistakenly shot down near Tehran on January 8.

Taking a swipe at the foreign sides for failing to cooperate with Iran, Zarif said the Islamic Republic is entitled to handle and oversee the investigations according to international regulations.

“But they (foreigners) do not allow for this (Iranian investigation) and must be held accountable,” the foreign minister added.

He emphasized that the foreign parties are duty bound to supply Iran with the means to read the Boeing plane’s black box, but “they have refused to do so and we will pursue the matter.”

Iran suffered the brunt of the accident and lost a group of top students in the bitter and painful incident, Zarif added.

In late January, a lawmaker told Tasnim that Tehran has decided to examine the flight recorders from the downed plane domestically.

The black box of the Ukraine International Airlines Boeing 737-800 plane will remain in Iran and be analyzed by the Ministry of Road and Urban Development, Farajollah Rajabi said.