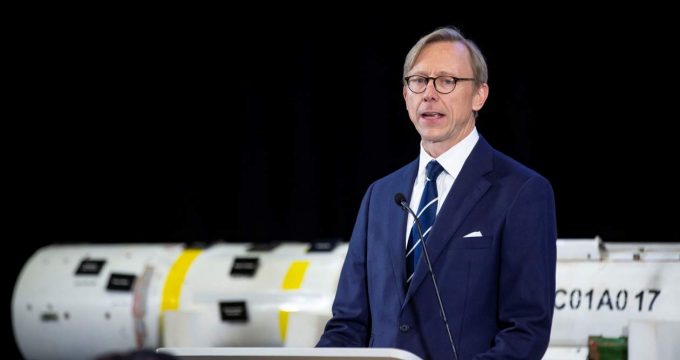 Republican hawks in Congress are outraged that foreign companies will still be allowed under U.S. law to work on four highly sensitive Iranian nuclear projects.

U.S. Special Representative Brian Hook Hook quietly unveiled the sixty-day waiver extensions at a Thursday morning press conference at the State Department. He originally downplayed them as “nuclear restrictions on Iran that prevent the continuation of nonproliferation projects that constrain Iran’s nuclear activities,” but the decision was a major blow to prominent Republicans hawks pushing to tear up nuclear nonproliferation agreements with Iran.

“This decision perpetuates Obama’s disastrous nuclear deal and sustains Iran’s nuclear infrastructure, even as Tehran continues on its path of escalation,” Rep. Liz Cheney (R–Wyo.) told the National Interest, referring to former President Barack Obama. “I urge the president to fully implement his successful maximum pressure campaign against Iran and revoke these waivers once and for all.”

A spokesperson for Ted Cruz (R–Texas) wrote to the National Interest that Cruz “believes that the waivers should have been canceled months ago, and in fact should have never been granted. He will continue to work with his colleagues in the Senate and the House to ensure that they are revoked.”

Cheney, Cruz, and Sen. Lindsey Graham (R–S.C.) had proposed a bill to end the waivers in November 2019, claiming that “these waivers keep the nuclear deal alive and give the Iranians hope they can wait out the Trump administration.”

Graham’s office did not respond to a request for comment as of press time.

Russian and Chinese companies are currently helping Iran modify a heavy water plant in Arak, import nuclear fuel for a power plant in Bushehr and a research reactor in Tehran, and export its stockpile of spent nuclear fuel. Iran is allowed to conduct these activities under a 2015 nuclear deal with the United States and six other world powers.

President Donald Trump broke from the deal in May 2018 and replaced it with a campaign of maximum pressure against the Iranian economy.

The facilities at Arak, Tehran, and Bushehr could theoretically be used to “make plutonium that you can later process to be weapons-grade,” explained Andrea Stricker, a research fellow at the Foundation for the Defense of Democracies.

The modifications at the Arak plant “make sure it can’t be used for dangerous activities,” explained Mary Kaszynski, a nuclear nonproliferation expert and deputy policy director at the Ploughshares Fund. And exporting Iran’s spent fuel prevents them from reprocessing it into plutonium, which “would open paths for Iran to potentially develop nuclear weapons.”

Kaszynski emphasized that Iran is allowed to maintain its research reactors and power plants under the international Nuclear Nonproliferation Treaty.

“Bottom line, Iran is not going to stop those activities,” she said. “It’s much better to have that under surveillance.”

But these waivers are a long-time target of Iran hawks who “saw them as a pillar” of the 2015 deal, according to Stricker. Behnam Ben Taleblu, another fellow at the Foundation for the Defense of Democracies, had called for suspending the Arak waiver in response to “Iranian subterfuge” in April 2019.

Stricker speculated that the Trump administration’s decision to extend the waivers is “an effort to avoid escalation on the nuclear side” until the Trump can end the 2015 nuclear deal and replace it with his own.

The Trump administration has been pushing European countries to join the maximum pressure campaign against Iran. U.S. Treasury Secretary Steven Mnuchin threatened to put economic sanctions on INSTEX, a long-delayed European program to encourage humanitarian trade with Iran, at a press conference earlier this month.

The Trump administration announced the beginning of its own rival program to sell food and medicine to Iran through Switzerland on Thursday morning. Hook explained that the U.S.-led program is superior because it forces companies to exercise “due diligence to avoid misuse by the Iranian regime.”

Thousands of Iranian cancer patients have reportedly died over the past few months due to medicine shortages, for which Hook blamed Iranian government corruption.

European countries have also triggered the “dispute resolution mechanism,” a process that could end the nuclear deal in a matter of months. German defence minister Annegret Kramp-Karrenbauer claimed that the Trump administration had threatened the German economy with tariffs unless Germany triggered the mechanism in early January.

“That’s a bilateral question,” Hook said when asked about the threat on Thursday. “We don’t get into deliberative discussions, so I can’t confirm or deny that.”

Matthew Petti is a national security reporter at the National Interest.