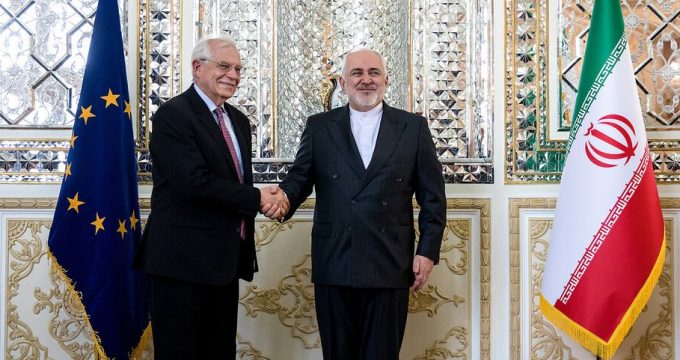 Iran, EU resume 2nd round of talks on issues of mutual interests

IRNA – Iranian Foreign Minister Mohammad Javad Zarif and High Representative of the European Union (EU) Josep Borrell resumed the second round of talks on issues of mutual interests in Tehran on Monday.

This is Borrell’s first visit to Iran and both sides are supposed to discuss issues related to Iran’s nuclear deal also known as the Joint Comprehensive Plan of Action (JCPOA), bilateral relations between Iran and Europe, the latest regional and international developments.

The EU top diplomat is also scheduled to hold talks with Iranian President Hassan Rouhani and the Iranian Parliament Speaker Ali Larijani during his stay in Tehran.

Earlier, a prominent lawyer from Geneva Graduate Institute of International and Development Studies Reza Nasri said he believes that the entire EU has more positive stance toward Iran, seeking Iran to form better relations with EU.

Nasri added that it was Borrell’s idea to postpone triggering the Dispute Resolution Mechanism.

He added apparently, Borrell is fairer toward Iran’s legal stance, including the fact that Iran has triggered the mechanism once, so Europe has no right to do so.

His presence in Tehran can be an opportunity to negotiate in order to find a way out of existing problems to reduce tensions between Iran and European Union states, he said.