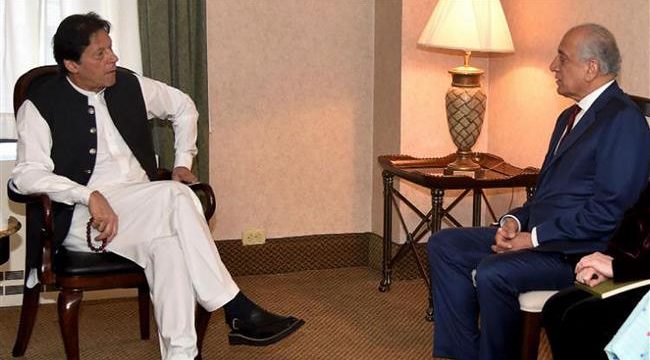 Press TV – US ‘peace envoy’ to talks with Afghanistan’s Taliban militant group has visited Pakistan in efforts to gather regional backing for reducing Afghan violence ahead of a final deal to end America’s longest war, even though official military figures show the US dropped record number of bombs on the country since 2013.

During the Islamabad visit, Zalmay Khalilzad tried to rally support for reaching a deal with the Taliban to reduce their attacks on US troops as a first step toward a peace pact to end nearly 19 years of war in Afghanistan, said a statement issued Saturday by the US Embassy Islamabad.

Following a series of meetings with Khalilzad on Friday, Pakistan’s foreign ministry also issued a statement claiming support for a “quick” peace agreement with the Afghan insurgent group, highlighting Washington’s desire for a halt to retaliatory militant attacks on the remaining US military forces in Afghanistan since they invaded the nation back in 2001.

Stepped up bombings across the country by US forces and operations by CIA-trained Afghan special forces — several of which have resulted in civilian casualties — have been sharply condemned by human rights groups, a number of Afghan officials and even resulted in the sacking of Afghanistan’s intelligence chief.

The surging US aerial attacks began in 2018 and have led to higher death tolls in the conflict. In 2019, American warplanes dropped 7,423 bombs on Afghanistan, up slightly from 2018 when it dropped 7,362 bombs on the war-torn country, according to official figures released by the US Central Command Combined Air Operations Center. This compares to a far lower 4,361 bombs dropped in 2017 and 1,337 in 2016, according to the statistics.

This is while the United Nations has blamed the growing US air strikes for a rise in civilian casualties across Afghanistan. For the first time since the US-led invasion of the nation in 2001, the UN said that Afghan government forces and their American allies killed more civilians in the first three months of last year than insurgents.

Meanwhile, the most recent airstrike to raise hackles in Afghanistan occurred overnight on Friday when a family of six, including a child, were killed in a northern province amid initial claims by the US military that the airstrike in Kunduz killed three Taliban militants and destroyed a cache of weapons.

Family members and local officials said the dead were all civilians, including an infant child.

US officials were later forces to change their story and admit to the killing of civilians, saying: “We are aware of the reports of civilian casualties reported to have occurred in Dasht-e-Archi district or Imam Sahib district, Kunduz Province, on Jan. 30. We are looking into these reports and will provide more information when it becomes available.”

Former Afghan president Hamid Karzai also condemned the airstrike in a Twitter message on Friday, saying: “the bombing of our homes and villages is an injustice against our people & a violation of our national sovereignty.”

He further demanded “the end to all military operations in our country.”

Meanwhile, the Taliban stated earlier that they offered Khalilzad a 10-day cease-fire window in which to sign a peace agreement that would be followed by intra-Afghan negotiations.

Khalilzad was appointed by the White House in 2018 to find a negotiated end to Afghanistan’s war that would allow the US to withdraw its estimated 13,000 soldiers and end its longest military engagement.

He has held multiple rounds of talks with the Taliban in the Persian Gulf state of Qatar where the militant group maintains a political office.

The development came just after the commander of US forces in the Middle East also paid an unannounced visit to Afghanistan, where he complained of an increase in Iranian activity in the country that “poses a risk to American and coalition forces there,” according to an AP report.

Marine Gen. Frank McKenzie made the allegation on Friday, telling reporters traveling with him that he is seeing a “worrisome trend,” from Iran.

“Iran has always sort of dabbled a little bit in Afghanistan, but they see perhaps an opportunity to get after us and the coalition here through their proxies,” he further claimed. “So, we are very concerned about that here as we go forward.”

McKenzie’s warnings came just weeks after Iran fired as many as two dozen ballistic missiles at two bases in Iraq, where US forces are stationed, retaliating a US terror killing of senior Iranian commander Gen. Ghassem Soleimani. Washington initially claimed no one was killed or injured as the result of the attack but then unveiled traumatic head injuries to US troops, repeatedly changing the casualty figure from 11 to what so far stands at 64.