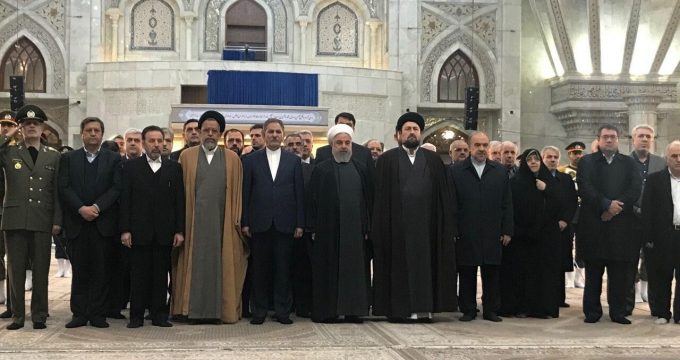 IRNA – President Hassan Rouhani and his cabinet ministers paid tribute to late Imam Khomeini, the founder of the Islamic Republic of Iran on Sunday.

The president and cabinet ministers went to the mausoleum of Imam Khomeini, southern Tehran, on the occasion of the Ten-Day-Dawn.

They laid a wreath of flower at Imam Khomeini’s tomb.

Rouhani and the cabinet ministers then went to the martyrs’ cemetery.

The day of Imam Khomeini’s return to Iran from exile (Feb 1, 1979) marks the beginning of the Ten-Day Dawn in Iran, which culminates with the anniversary of the victory of the Islamic Revolution on February 11, 1979.

The Iranian nation toppled the US-backed Pahlavi regime 41 years ago, ending 2,500 years of monarchy in the country.