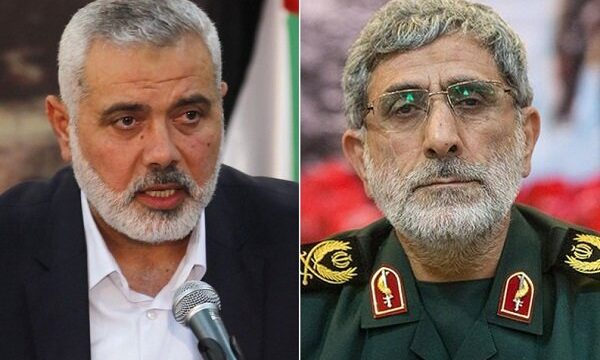 MNA – Following the unveiling of the so-called ‘Deal of Century’ by the US administration, a top Iranian commander discussed the situation with Hamas leader.

In a phone conversation on Saturday evening, Quds Force commander Brigadier General Esmail Ghaani and Ismail Haniyeh, the political leader of Islamic Resistance Movement of Hamas, conferred on the US new plot for the region.

Ghaani said that Iran is ready to foil this plot and confront its following dangers with the cooperation of the Palestinian people, especially the Resistance forces. Iran will continue its support for the Palestinian resistance and people as it did in the tenure of Martyr Soleimani, said the commander.

For his part, Haniyeh appreciated Iran’s stance towards Palestine, saying that all Palestinians reject this plan. Haniyeh said he is sure Palestinians enjoy the required power and determination to defeat this plot.

Standing beside Israeli regime’s Prime Minister Benjamin Netanyahu, US President Donald Trump unveiled the so-called ‘Deal of the Century’ some days ago.

Trump repeated his highly controversial endorsement of occupied Jerusalem al-Quds as Israel’s “undivided capital” as he outlined his administration’s self-styled plan for the Palestinian-Israeli conflict, which Palestinians have already dismissed.

He endorsed his contentious recognition in December 2017 of Jerusalem al-Quds as Israel’s “capital,” a move he took in the face of Palestinian demands that the holy city should serve as the capital of their future state. He said the plan envisages the city as the Israeli regime’s “undivided capital.”

The so-called peace plan is widely expected to take the US’s pro-Israeli brinksmanship to a whole new level, with various reports warning that it seeks to lay the groundwork for Israel’s annexation of about half of the West Bank, which the regime occupied in 1967, including most of the Jordan Valley.

Thousands of Palestinians protested in Gaza, and people across the West Bank and Jerusalem voiced their objection and anger over the contentious plan.