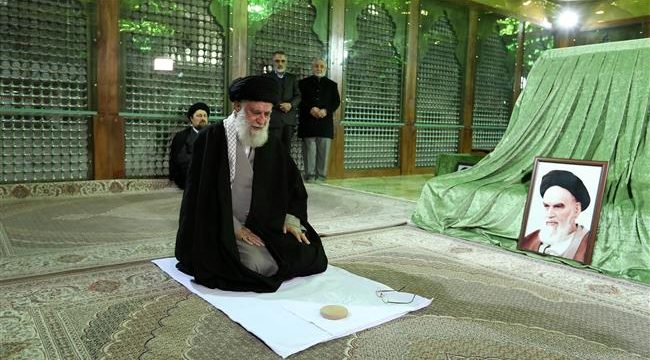 The Leader made the visit early on Saturday, which marks the day Imam Khomeini returned to the Iranian capital Tehran on February 1, 1979, ten days before the revolution, which ended the monarchy of the US-backed Pahlavi regime in the country.

After performing prayers in the mausoleum south of Tehran, Ayatollah Khomeini also visited the nearby Behesht Zahra cemetery, where Imam Khomeini delivered his first speech after the exile, in an address to five million people.

The leader also paid tribute to Iranian martyrs who have lost their lives since the Islamic Revolution.

A special public ceremony is also held at the Imam Khomeini mausoleum, with a host of senior state and military officials as well as thousands of people from all walks of life in attendance.

Imam Khomeini’s return to the country ultimately resulted in the overthrow of the shah, Mohammad-Reza Pahlavi.

Despite being contrary to the wishes of Iran’s rulers at the time, the Imam’s return, after a 15-year exile, was made possible due to the sheer abundance of popular support for the revolutionary leader among the masses.

Iran has ever-since commemorated the events with 10-Day Dawn festivities, which culminate in nationwide rallies on February 11, marking the anniversary of the Islamic Revolution.