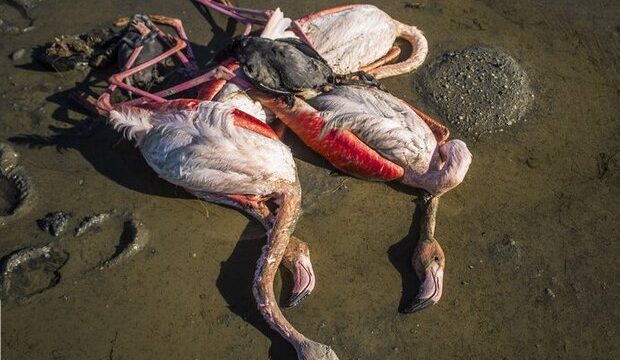 Flocks of migratory birds perish in peninsula in northern Iran

MNA – An increasing number of migratory birds have been found dead in the Miankaleh peninsula in Mazandaran province, northern Iran.

According to Hossein-Ali Ebrahimi, head of Mazandaran province’s department of environment, the corpses of some 8,000 birds of different species, including flamingos, have been collected in the peninsula since the unusual death of the birds was witnessed last week.

The official noted that a group of experts from Iran’s Department of Environment has been sent to Mazandaran province to investigate the cause of migratory birds’ death.

Miankaleh is a narrow and long peninsula situated in the extreme southeastern part of the Caspian Sea. It is spread over 68,800 hectares. Its wetland is a wildlife sanctuary and hosts a number of endangered species, particularly aquatic migratory birds who arrive at the site for laying eggs.

Miankaleh Peninsula was registered in 1969 as a wetland of international importance under the Ramsar Convention. In 1979, the peninsula was declared a biosphere reserve by UNESCO.

The biosphere reserve’s ecological importance is highlighted by its hosting of 250,000 migratory birds, including pelican, flamingo, graylag and white-fronted geese, swan, red-breasted merganser and the white-headed duck, in winters.