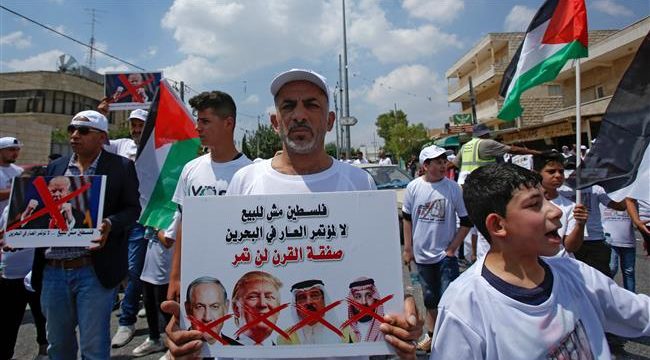 Trump’s delusional deal of century will be dead on arrival: Zarif

Press TV – Iran’s Foreign Minister Mohammad Javad Zarif has dismissed US President Donald Trump’s “delusional Deal of the Century” on the decades-old Israeli-Palestinian conflict, stressing that it will be “dead on arrival.”

Zarif made the remarks in a Monday Tweet, noting that instead of promoting the so-called Deal of the Century, the world must respect the right of all Palestinian peoples to self-determination.

“Instead of a delusional ‘Deal of the Century’—which will be D.O.A.—self-described ‘champions of democracy’ would do better to accept Iran’s democratic solution proposed by Ayatollah @khamenei_ir,” Iran’s foreign minister tweeted.

He added that the best solution to end Israel’s occupation of Palestinian territories is the one proposed by the Leader of the Islamic Revolution Ayatollah Seyyed Ali Khamenei, who proposed a referendum, which would allow peoples living in Palestine to play their share in determining their future.

Even though the full US plan on the Israeli-Palestinian conflict has not been released, Israeli media outlets have described it as a deal that meets nearly all of the Tel Aviv regime’s demands in exchange for the possibility of maybe, someday recognizing a Palestinian state.

According to the English-language online newspaper Times of Israel, the deal drastically undermines Palestinian hopes for restoring land seized by Israeli settlements and allows Israel to expand its territory even further.

The plan has already been unanimously rejected by all Palestinian factions.

The Iranian foreign minister also said in his tweet that the best solution to end Israel’s occupation of Palestinian territories is the one proposed by the Leader of the Islamic Revolution Ayatollah Seyyed Ali Khamenei, who proposed a referendum, which would allow peoples living in Palestine to play their share in determining their future.

In June 2018, Ayatollah Khamenei reasserted the need for a referendum among “true Palestinians of all faiths,” being Muslims, Christians or Jews, stressing that such a move would lead to the establishment of the Palestinian government.

Ayatollah Khamenei said the referendum and the subsequent formation of such a governing system would eventually translate into the destruction of the “bogus regime” of Israel in the not-too-distant future.

Once that happens, the Leader said, the unity of the Islamic Ummah as well as its esteem would be further bolstered.

Palestinian Prime Minister Mohammad Shtayyeh said on Monday that President Trump’s so-called deal of the century aims to protect him from impeachment and the Israeli premier from imprisonment.

“This plan does not form the basis for resolving the conflict, and is presented by a party that has lost its integrity and credibility. It is a plan to protect Trump from impeachment and [Benjamin] Netanyahu from prison. It is not a Middle East peace plan,” Shtayyeh told a weekly cabinet session in the occupied West Bank city of Ramallah.

“This plan gives Israel sovereignty over Palestinian territory,” he said.