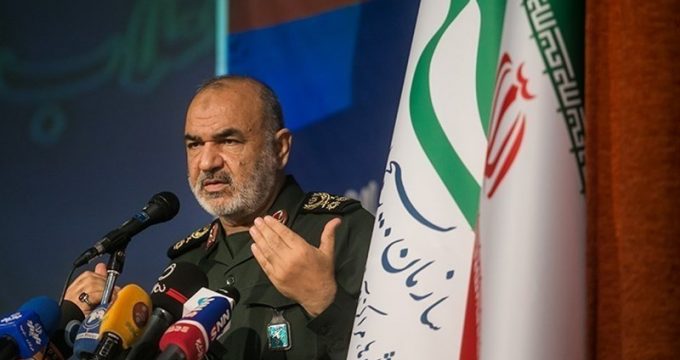 Enemies to regret any military action against Iran: IRGC chief

Tasnim – Commander of the Islamic Revolution Guards Corps (IRGC) Major General Hossein Salami warned the adversaries that any military action against Iran will backfire and aggressors would regret making such a decision.

In an address to a meeting of Basij commanders on Monday, General Salami said the enemies of Iran have not stood idle but resort to every method to harm the Islamic Revolution.

“In spite of all plots and ploys, the enemies of the Iranian nation have recognized today that military threats against us are futile and would not work for them, and if they take military action against the Islamic Iran, they will obtain an adverse result and regret (making such a move),” the commander said.

He also stated that the assassination of top Iranian commander Lt. General Qassem Soleimani laid bare the “satanic face” of the US and increased the Iranian nation’s hatred of the US, which had been seeking to portray itself as a pacific government.

After the unfair assassination of Lt. General Soleimani, the US had warned that any retaliatory attack from Iran would draw a harsh military reaction, but the IRGC gave the US a slap in the face by launching a missile attack on a major American base in Iraq and US President Donald Trump was unable to respond, General Salami added.

On January 8, the Islamic Revolution Guards Corps launched a missile attack on Ain al-Assad airbase in Iraq’s western province of Anbar, in retaliation for the US assassination of Lt. General Soleimani.

Fifteen missiles rained down on the American base, none of which were intercepted by the US army’s radar systems.