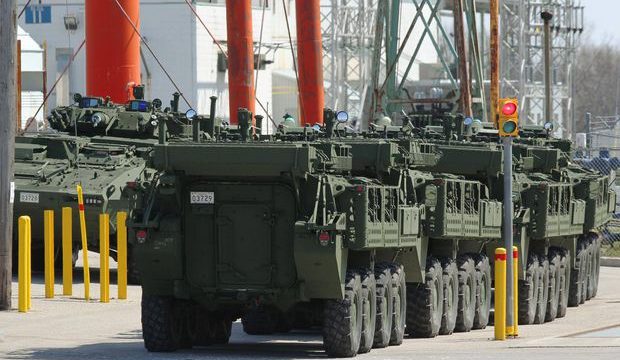 The Globe And Mail – Canada has soared in global rankings to become the second biggest arms dealer to the Middle East on the strength of its massive sale of combat vehicles to Saudi Arabia, new figures show.

It’s a first for Canada, according to IHS Jane’s, the defence industry publisher that tracks military spending. Canada was previously the sixth-largest weapons vendor to Mideast countries. The United States is No. 1.

Canada has also vaulted to sixth overall among all arms-exporting countries, based on rankings released by Jane’s this week. This means only five countries are currently selling more weapons and military equipment.

IHS Jane’s analyst Ben Moores said he suspects Canada has never ranked so highly among all arms-exporting countries and that it certainly hasn’t held that position in the past 15 years.

The Trudeau government, asked whether it took pride in Canada’s expanded role as a weapons seller and would feature this achievement in trade promotion materials, referred the questions to a department of Global Affairs bureaucrat. The civil servant instead said Ottawa hopes to toughen screening of weapons sold to foreigners.

The Trudeau government gave the green light for the $15-billion sale of fighting vehicles to proceed to Saudi Arabia, a country regularly ranked by watchdog Freedom House as among the “worst of the worst” on human rights.

The Liberal decision to issue export permits, in April, was made despite an internal Global Affairs report warning of worrisome developments in human rights and analyses from watchdogs such as Amnesty International, which said human rights in Saudi Arabia have “steadily deteriorated” in the previous 12 months.

These Jane’s arms-sales rankings emerge as relations grow more strained between Saudi Arabia and the United States, the biggest source of arms for the Mideast. Presumptive Democratic presidential candidate Hillary Clinton linked Saudi Arabia and its neighbours to extremism in the aftermath of Sunday’s mass shooting in Orlando, calling on these Mideast countries to stop their citizens from funding extremism. Riyadh is still angry at Washington’s nuclear pact with Iran and officials in April threatened to sell off $750-billion in U.S. government bonds if Congress allowed Americans to sue Saudi officials over terrorism.

Saudi Arabia’s Interior Ministry confirmed Monday that Omar Mateen, who killed 49 people in Orlando, travelled to the desert kingdom in 2011 and 2012 on an Islamic pilgrimage. Officials say there is no evidence Mr. Mateen made contract with extremists during his two trips to Saudi Arabia.

The Canadian Association of Defence and Security Industries did not immediately respond to a request for comment.

Cesar Jaramillo, executive director of Project Ploughshares, a disarmament group in Waterloo, Ont., that is an agency of the Canadian Council of Churches and tracks arms shipments, said Canadians should be worried that their country is now the second-largest arms exporter to “the most volatile region in the world” today.

“This ranking comes days after Canada addressed the UN Security Council and highlighted the importance of protecting civilians in conflict zones … it is civilians who are often most at risk as a result of arms dealings, in particular to regions engulfed in conflict and notorious for their poor human rights records,” Mr. Jaramillo said.

Adam Taylor, a former Harper government staffer, said Canada should be pleased with its ascension through the ranks of arms suppliers – or indeed any expansion of international trade.

“Canada should be proud that in a fiercely competitive global context Canada is competing and winning against the best in the world in the defence sector,” said Mr. Taylor, a trade consultant at Ensight in Ottawa.

“All of our closest political allies are our fiercest economic competitors. Those governments support their businesses’ pursuits of global opportunities and so should Canada’s.”

Peggy Mason, an opponent of the Saudi arms deal, who once served as Canada’s United Nations ambassador for disarmament, said it’s hard to justify Canadian weapons exports to any Mideast country.

“It is hard to identify even one country in the Middle East to which Canada could export military equipment without potentially violating one or more of these principles. It is therefore an extremely sad day to read in Jane’s Defence Weekly that Canada has catapulted to No. 2 arms exporter to the Middle East.”