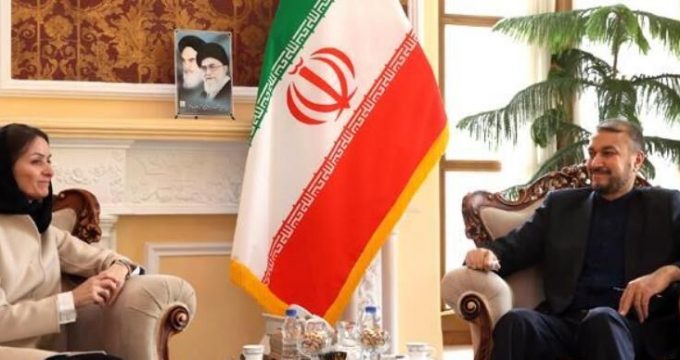 IRNA – Adviser to Iran’s Parliament Speaker in International Affairs and Director General of the Parliament’s International Affairs Department in a meeting with the Danish Foreign Ministry’s Director-General called the European countries’ stance on activating the trigger mechanism against Joint Comprehensive Plan of Action (JCPOA) unconstructive.

Hossein Amir Abdollahian met Danish Foreign Ministry’s director-general, Christina Markus Lassen, on Wednesday and during the meeting referred to the long history of bilateral relations between the two countries and noted that Iran and Denmark enjoy the great potential for expanding friendly relations and cooperation.

Emphasizing the importance of dialogue, the Special Assistant to the Parliament Speaker stressed the role of parliamentary diplomacy in the development of communication and cooperation between the two countries and made the remark that the development of parliamentary communication has an effective role in helping to better understand each other’s positions and to develop mutual cooperation.

Christina Markus Lassen also stressed the importance of Iran’s role and position in the region, adding that the continuation of friendly dialogue with the Islamic Republic of Iran in Danish foreign policy is also very important.

Expressing concern over the escalating tensions in the West Asian region, the Danish Foreign Ministry official highlighted that the use of negotiations and political dialogue was the only way out of the current situation and removing the risk of war in the region.

Referring to the nuclear deal and the trigger mechanism, the Danish official noted that Denmark wants all parties to return to and abide by their commitments.