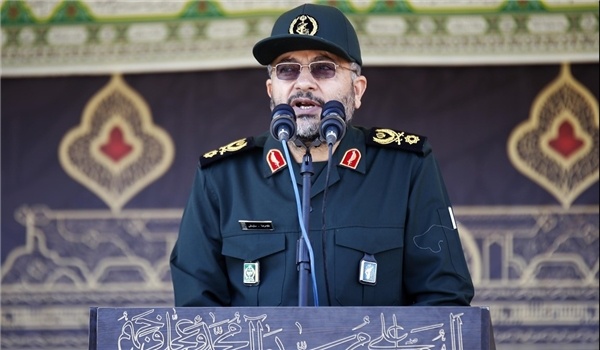 FNA – Commander of Basij (volunteer) forces Brigadier General Gholamreza Soleimani underlined that the January 8 retaliatory missile attacks against the US Ein al-Assad base in Iraq left no efficiency and credit for American bases across the region.

“After the missile strikes on Ein al-Assad, the US bases are no more favored in any country. If any move is made from inside any base in any country against the Revolution and the Islamic Republic, it will be targeted and therefore, these bases have been rendered useless,” General Soleimani said, addressing a ceremony in the Southeastern city of Kerman on Thursday.

He added that assassination of former IRGC Quds Force Commander Lieutenant General Qassem Soleimani ruined the acceptability and credit rate of the US policies in the world “and their presence in the region is no more acceptable”.

Lieutenant General Soleimani was assassinated in a US drone strike on Baghdad International Airport in Iraq on January 3.

The airstrike also martyred Abu Mahdi al-Muhandis, deputy commander of Iraq’s Popular Mobilization Forces (PMF), or Hashad al-Shaabi. The two were martyred in an American airstrike that targeted their vehicle on the road to the airport.

The second IRGC reprisal attack targeted a US military base near Erbil airport in Iraqi Kurdistan Region in the second leg of “Martyr Soleimani” reprisal operation.

It was the first direct attack on the US army ever since world war two.