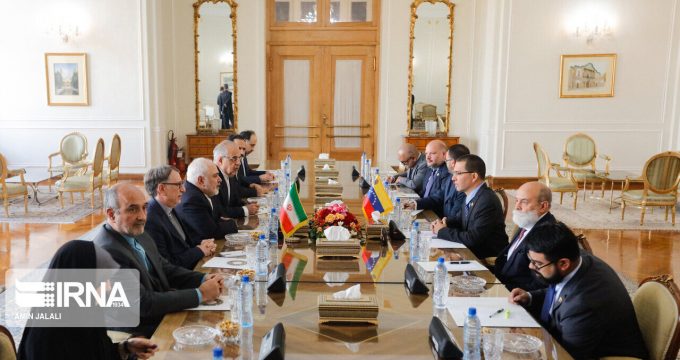 IRNA – Iranian Foreign Minister Mohammad Javad Zarif said on Monday that martyred Lieutenant General Qasem Soleimani was a prominent figure in the Resistance Front and even his martyrdom was source of inspiration for the Resistance.

Zarif made the remarks in a meeting with Venezuelan counterpart Jorge Arreaza in Tehran on Monday.

He appreciated Venezuelan government and people for their sympathy after the assassination of the Iranian commander and also the bitter accident of the Ukrainian plane crash.

He referred to participation of large number of people in other countries in General Soleimani commemoration ceremony and their expression of hatred against US Administration’s terrorist acts.

He also elaborated on the Iranian’s massive turnout in funeral procession of General Soleimani and the request for a legitimate defense and not bowing to US’S regime’s bullying.

Elsewhere in his remarks, Zarif expressed regret over the recent air crash in Tehran and referred to urgent measures taken by Iran in presenting facilities to those affected by the accident.

He also stressed on developing relations between two countries.

During the meeting both sides conferred on establishing cooperation in bilateral and international fields.

The Venezuelan foreign minister is to confer with Iranian officials on issues of mutual interest, Mousavi added.

Earlier in October, Zarif had met with his Venezuelan counterpart in New York.