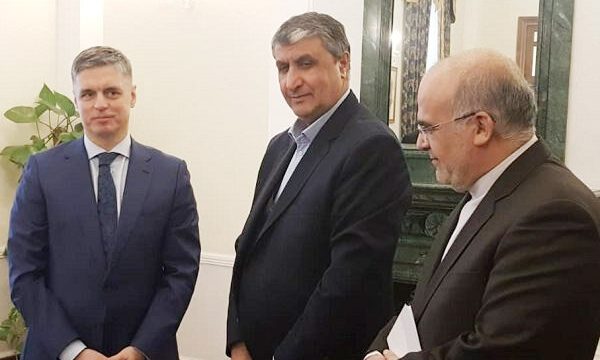 Eslami arrived in the Ukrainian capital on Monday to express official condolences and sympathy of Iranian President Hassan Rouhani over the unintentional shooting down of a Ukrainian passenger plane outside Tehran.

He is scheduled to meet with Ukrainian President Volodymyr Zelensky in the evening to pursue bilateral cooperation and joint efforts by the two countries to reduce the pain of victims’ families.

Upon his arrival, Eslami and Vadym Prystaiko discussed bilateral and multilateral cooperation, the pursuit of joint cooperation, as well as a follow-up of the issues related to the plane incident.

A Ukrainian plane with 176 people on board was unintentionally downed near the capital city of Tehran on January 8 by IRGC Aerospace amid the heightened tensions between Iran and the US in the past weeks. The victims include mostly Iranians and Iranian-Canadians, 11 Ukrainians, and four British nationals.

The incident came hours after Iran fired ballistic missiles at two American military bases in neighboring Iraq to respond to the US assassination of a senior Iranian military commander in the Arab country earlier this month.

Iranian military forces have accepted full responsibility for the mistake, saying it was largely unavoidable due to high tensions that existed at the time.