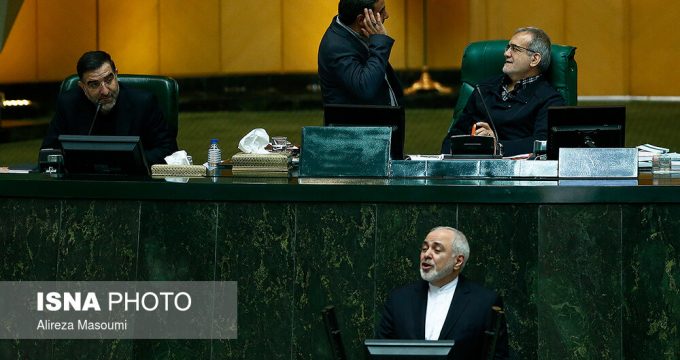 Bloomberg | Arsalan Shahla: Iran will withdraw from a major non-proliferation treaty if European nations attempt to refer the Islamic Republic to the UN Security Council over its infringements of the 2015 nuclear deal, the country’s foreign minister said.

The U.K., France and Germany said last week they would trigger the accord’s dispute resolution mechanism, which could eventually mean the matter being referred to the Security Council. The move inflamed tensions with Tehran, which is locked in an economic confrontation with the U.S. that this month sparked a military exchange.

“If Europeans continue their untenable conduct or send Iran’s nuclear case to the United Nations Security Council, we will withdraw from the N.P.T.,” Mohammad Javad Zarif told lawmakers, referring to the international treaty to stop the spread of nuclear weapons, the official parliamentary news service ICANA reported.

Iran was an early signatory of the 1970 treaty, which was designed to eventually lead to disarmament. Non-nuclear weapons states that are signatories, including Iran, agree not to pursue weapons and to only develop peaceful atomic technology.

Earlier on Monday, Foreign Ministry spokesman Abbas Mousavi said Iran is planning “one last step” in its gradual draw-down from complying with the nuclear deal, raising the possibility that it’s close to announcing a complete withdrawal from the embattled international accord. The final measure will have “more effective consequences,” Mousavi said.

Iran has been gradually reducing its compliance with the 2015 accord, known as the Joint Comprehensive Plan of Action, since U.S. President Donald Trump abandoned it and began reimposing sanctions on the country’s economy.

Earlier this month, Iran announced it’s no longer observing limits on uranium enrichment or research and development activities, but insisted it was still working within the parameters of the deal and would continue cooperating with United Nations nuclear inspectors.

President Hassan Rouhani last week said all the steps could still be reversed as soon as Europe was able to commit to the agreement and take concrete steps allowing Iran to sell oil.

Days before European nations turned up pressure on the Islamic Republic, the U.S. and Iran came to the brink of war after Trump ordered the killing of top Iranian general Qassem Soleimani. As Iranian forces launched retaliatory attacks on U.S. facilities in the Middle East, they accidentally shot down a Ukrainian airliner over Tehran, triggering protests against the regime.

Britain has also infuriated Iran’s government by proposing that the current accord be replaced with a “Trump deal.” Mousavi said that while Iran remains open to talks with the EU on the future of the agreement, the Islamic Republic won’t agree to any proposals from either the bloc or the U.S. for an alternative to the existing deal.